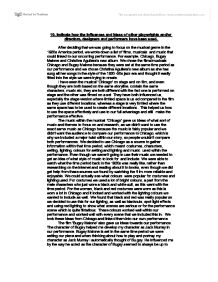 Indicate how the influences and ideas of other playwrights and/or directors, designers and performers have been used.

10. Indicate how the influences and ideas of other playwrights and/or directors, designers and performers have been used. After deciding that we was going to focus on the musical genre in the 1920s America period, we wrote down a list of films, musicals and music that could linked to our oncoming performance. For example, Chicago, Bugsy Malone and Christina Aguilera's new album. We chose the films/musicals Chicago and Bugsy Malone because they were set at the same time period as our performance and we chose Christina Aguilera's new album as she has sung all her songs in the style of the 1920-30s jazz era and thought it easily fitted into the style we were trying to create. I have seen the musical 'Chicago' on stage and on film, and even though they are both based on the same storyline, contain the same characters, music etc, they are both different with the fact one is performed on stage and the other was filmed on a set. They have both influenced us, especially the stage version where limited space is used compared to the film as they use different locations, whereas a stage is very limited where the same space has to be used to create different locations. ...read more.

The character of Busy also seemed to be a bit of the 'jack the lad' sort of person and I feel that this defiantly influenced me for my character and is shown well when playing Jack Murray. The characters of Bessie Smith and Ma Rainey were influenced by the two real lives of Bessie Smith and Ma Rainey. We researched information about them both and found out that Ma Rainey use to be violent and bossy towards Bessie Smith and we created the characters from there. We found Christina Aguilera's new album very relevant for our performance. Her music was inspired by the 1920-1930s style of music. We felt by using some of her music for our performance we are still including music relevant to the time period and at the same time people will recognise her music and still making our performance relevant to today. Instead of only focusing the music within our performance on Christina's music we also researched actual artists from the 1920s. We found music from famous artists such as Billy Holiday, Bessie Smith and Louis Armstrong and we actually included one of his songs for one of our performance pieces but actually sung by one of the actors instead of it being a voice over like we had done so far for our singing performances. ...read more.

All the films/ musicians/ singers/ practitioners influenced our piece in many ways that I have already discussed. The musicians and singers helped us decide what style of music to include that would make our piece a success and would link in well with our story. The films influenced the development of some of our characters such as Jack Murray, and they also influenced our costumes, in what styles to go for and colours as well. The practitioner, John Godber helped us make multi-rolling really work within our performance by reading and looking at his other work and how to make multi-rolling a success within your performance, which I think made our piece really successful. We tried to make our performance very different to one's people would had seen before so we tried not to get too heavily influenced by other playwrights, directors, films and musicals. Especially with the storyline as this is what seemed too happened at first when deciding on a storyline. Instead we were only really looking for ideas to help us on the design side of the performance, and when researching characters and music for our performance. ...read more.