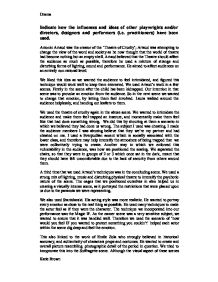 Indicate how the influences and ideas of other playwrights and/or directors, designers and performers (i.e. practitioners) have been used.

Indicate how the influences and ideas of other playwrights and/or directors, designers and performers (i.e. practitioners) have been used. Antonin Artaud was the creator of the 'Theatre of Cruelty'; Artaud was attempting to change the view of the word and society as he now thought that the world of theatre had become nothing but an empty shell. Artaud believed that the Theatre should affect the audience as much as possible, therefore he used a mixture of strange and disturbing forms of lighting, sound and performance. He aimed to affect audiences on an entirely non-rational level. We liked this idea as we wanted the audience to feel intimidated, and figured this technique would work well to keep them interested. We used Artaud's work in a few scenes. Firstly in the scene after the child has been kidnapped. Our intention in that scene was to provoke an emotion from the audience. So in the next scene we wanted to change that emotion, by letting them feel involved. ...read more.

A third time that we used Artaud's techniques was in the concluding scene. We used a strong mix of lighting, music and disturbing physical theatre to intensify the psychotic nature of the scene. The cages that we positioned ourselves in also helped us in creating a visually intense scene, as it portrayed the restrictions that were placed upon us due to the paranoia we were representing. We also used Stanislavski. His acting style was more realistic. He wanted to portray every emotion as close to the real thing as possible. He used many techniques to make the actor feel as if they were the character. The technique we incorporated into our performance was the Magic IF. As the cancer scene was a very sensitive subject, we wanted to ensure that it was handled well. Therefore we used the scenario of 'how would you feel IF you wanted to protect something you couldn't' helped each actor within the scene dig deep and feel the emotion. ...read more.

We used this idea through our use of choral work in the performance of the epilepsy poem. The physical theatre worked really well with the contrasts of our voices. We also used our bodies to create a heart. This proved to be very effective to the audience as when it was mixed with the lighting and the sound of a heartbeat we had found, it became explicitly obvious what we were creating. Another practitioner's ideas we used was Steven Berkoff's, he is an actor, playwright and theatre director. His work is physical, musical and surreal, combining movement, mime and text to dramatic effect. Our set was as minimalist as possible, which Berkoff liked. He didn't like the audience to be distracted from the performance that was on stage. Our set stage was two double black boards featured at the back of the stage, which were covered in the word 'trapped' and written in different sizes, and styles. Althought this was simple, it still allowed for the word to become subconciously ingrained into the audiences minds. ?? ?? ?? ?? Drama Katie Brown ...read more.

This answer is in response to a question that asks about how the works and influences of other theatre practitioners have been used in theatre overall. There is a very good level of focus on an extensive number of theatre ...

This answer is in response to a question that asks about how the works and influences of other theatre practitioners have been used in theatre overall. There is a very good level of focus on an extensive number of theatre practitioners (perhaps too many to consider the analysis of each to be suitably effective in depth and quantity), including Artaud, Berkoff, DV8, Zola, Brecht, and Stanislavski. The is a clear bias towards the use of Artaud and perhaps a greater balance should be sought after, or else the candidate could refrain from commenting too much on the use of Stanislavski and Brecht, whose theatrical intention are wildly different to Artaud's, who seem to be their main influence. The problem with mentioning so many influences is that it doesn't give the examiner any more inclination of your knowledge of your practitioner if you end up contradicting yourself by suggesting that your are influence by the Theatre of Cruelty as well as Representational Theatre, Physical Theatre and Naturalistic Theatre to name a few.

The Level of Analysis shown is good as far as the comments made on Artaud are concerned. The candidate displays an fairly well-developed knowledge of the Theatre of Cruelty's principles (though more could be said on what Artaud believed about language dominating theatre previous to his own initiation), and they use evidence from their own production to a good level of explanation. I would like to though, as an improvement, see more fleshed-out examples of this candidates devised work, with an extensive explanation of the themes and sections of their play and how they tie in with each of their various influences. This has only been done to a fair standard with Artaud, and the other influences do not seem to have been developed well at all. If the candidate does not know fully the stylistic difference between certain theatre practitioners, or how to effectively incorporate elements of the style into their own devised piece, then they should simply refrain from mentioning them.

The Quality of Written Communication here is good. There is good adherence to the standards required of A Level students and the clarity of written expression leads to a completely unambiguous answer. It is very well-written though could benefit from a better structure, as the current one segregates each theatre practitioners to their own paragraph, and this makes it very obvious to the examiner when the candidate has run out of things to say about each practitioner, as some paragraphs are only three/four lines long (compared with the four large paragraphs on Artaud's influence), so perhaps a careful use of integration would be best for including lots of practitioners in conjunction with others, as it would create a cohesive and jointed answer.