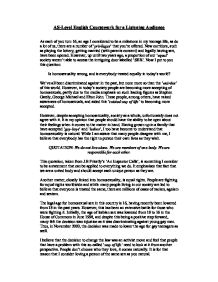 Is homosexuality wrong, and is everybody treated equally in today's world?

AS-Level English Coursework for a Listening Audience As each of you turn 16, an age I considered to be a milestone in my teenage life, as do a lot of us, there are a number of 'privileges' that you're offered. New corridors, such as playing the lottery, getting married (with parents consent) and legally having s*x, have been opened. However, up until two years ago, a proportion of our 'equal' society weren't able to access the intriguing door labelled 's*x'. Now I put to you this question: Is homosexuality wrong, and is everybody treated equally in today's world? We've all been discriminated against in the past, but none more so than the 'weirdos' of this world. However, in today's society people are becoming more accepting of homosexuals, partly due to the media emphasis on such leading figures as Stephen Gately, George Michael and Elton John. These people, among others, have raised awareness of homosexuals, and aided this 'twisted way of life' to becoming more accepted. However, despite accepting homosexuality, society as a whole, unfortunately does not agree with it. It is my opinion that people should have the ability to be open about their feelings when it comes to the matter in hand. ...read more.

To not accept it, and to ensure that you don't discriminate against homosexuals, is yet again more than acceptable, as everybody should be able to pursue their own lives, as they want. However, in my opinion, if you cannot accept or agree with homosexuality, a small factor that contributes to a whole person, and you discriminate against a person because they aren't the same as you, then you are the one in the wrong, not anyone else, and definitely not homosexuals. Holly Manning 614 words Commentary on AS-Level Listening Piece My piece is written for a listening audience, specifically a GCSE age class or 16 year olds. It is on the subject of homosexuality and takes the form of a speech. My intended purpose for the piece was to persuade my audience to accept homosexuality, and to take on board my opinions on the matter, but also to provoke their own thoughts on equal rights and homosexuality. I have included many of the traditional conventions used in persuasive writing in my speech, and through the use of my own opinions, and emphasising factual information, I have produced a well-balanced speech. I have found that other persuasive talks I have seen have been very hard-hitting and effective due to the use of sarcasm, which I ...read more.

I have related my audience to what I am saying by name-dropping some leading figures in the music industry that are openly h********l. This holds the audience's attention, and makes them feel more involved as they understand what I am talking about. Later, I also use a quotation from 'An Inspector Calls'. This quotation is rhetorically phrased, and requires no background knowledge of the play to understand what is being said. This is a very persuasive quotation to use and I feel it backs up my argument well. Towards the end section of my speech I have a section of factual information on homosexuality and the rights and laws that have been passed on the matter, This gives me credibility as it suggests that I know what I am talking about and gives my audience some core facts to think about, rather than purely my opinion. In addition, it gives my piece some variety. To conclude my speech I have given my audience something to consider, which could be seen as some kind of ultimatum. Additionally, I have used a long sentence structure in order to build the end of my piece to a climax. I have also returned to using 2nd person narrative ...read more.