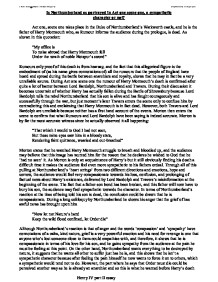 Is Northumberland as portrayed in Act one scene one, a sympathetic character or not?

Is Northumberland as portrayed in Act one scene one, a sympathetic character or not? Act one, scene one takes place in the Duke of Northumberland's Warkworth castle, and he is the father of Harry Monmouth who, as Rumour informs the audience during the prologue, is dead. As shown in this quotation: "My office is To noise abroad that Harry Monmouth fell Under the wrath of noble Hotspur's sword" Rumours only proof of this death is from hearsay, and the fact that this allegorical figure is the embodiment of (as his name gives connotations of) all the rumours that the people of England have heard and spread during the battle between anarchists and royalty, shows that he may in fact be a very unreliable source. During Act one scene one the rumour of Harry Monmouth's death is confirmed after quite a lot of banter between Lord Bardolph, Northumberland and Travers. During their discussion it becomes uncertain of whether Harry has actually fallen during the Battle of Shrewsbury because Lord Bardolph tells the rebel Northumberland that his son is alive and has fought courageously and successfully through the war, but just moment's later Travers enters the scene only to confuse him by contradicting this and exclaiming that Harry Monmouth is in fact dead. ...read more.

On the other hand, Northumberland wants everything to be destroyed by nature, it suggests that he wants all other to suffer just has he is, and this shows that he isn't a sympathetic character because after feeling the pain himself he now wants to force it on to others, which a sympathetic would tend not to do. However, the part where he says that Order must die could be perceived another way as he is already an anarchist and so this is what he wanted before Harry's death and so may not be a product of his grief but he is using his son's death as another motive to aim at his goals. Northumberland objected to Richard II and helped to overthrow him, but now he wants to rebel against Bolingbrook (Henry IV), who he once supported, but now believes him to be too devious, and this shows how involved he is in his anarchist behaviour, as well as how unpredictable his actions tend to be and so this gives support to the latter idea that his grief serves as a positive to his ambitions. Also, his son was very well liked in the kingdom as he was very charismatic and energetic, which are traits many would have been fond of. ...read more.

situation or whether his service believe he is lying and so know that he is competent to do the wait upon himself. This introduction and the reality of Northumberland's situation, being at home with his service makes him seem a very unsympathetic character; he has waged war on the monarchy and then leaves it up to others to do his duty. Also, in order to continue this point the idea that someone is too sick to go to war but still able to walk around by himself may make those watching the play feel even more strongly that he is in fact a liar. The setting is too cosy for anyone to feel much sympathy for the rebel. In conclusion, any sympathy that is drawn from Northumberland's loss is destroyed when his reasons are analysed, and his illness is proposed to be fake it is quite clear that he is mostly not a sympathetic character. However, it is impossible to prove this because it is only a rumour that he is playing 'crafty sick', he may really be unwell but he did send his family to be killed when he is in a homely environment and this may make the audience believe him to definitely be an unsympathetic character. ?? ?? ?? ?? A2 English literature Joanne Murch Henry IV part II essay ...read more.