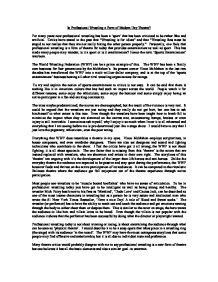 Is Professional Wrestling a Form of Modern Day Theatre?

Is Professional Wrestling a Form of Modern Day Theatre? For many years now professional wrestling has been a 'sport' that has been criticised to be rather fake and artificial. Critics have stated in the past that "Wrestling is for idiots" and that "Wrestling fans must be stupid to not realise that they are not really hitting the other person properly." Personally, one feels that professional wrestling is a form of theatre for today that provides entertainment as well as sport. This has made many people may wonder, is it a sport or is it entertainment? Hence the term 'Sports Entertainment' was born. The World Wrestling Federation (WWF) can be a prime example of this. The WWF has been a family own business for four generations by the McMahon's. Its present owner Vince McMahon in the last two decades has transformed the WWF into a multi-million-dollar company, and is at the top of the 'sports entertainment' business beating all other rival wrestling organizations for ratings. ...read more.

I sometimes ask myself, why I enjoy it so much when I now it is all rehearsed and everything that I am seeing before me is pre-determined just like a stage show. I would have to say that I just love the pageantry, athleticism, even the poor acting. Everything that WWF does resembles a theatre in my eyes. Vince McMahon employs scriptwriters, in house composers, and even wardrobe designers. There are also set designers and sound and lighting technicians who contribute to the show. I feel the critics have got it all wrong; the WWF is not about fighting, it is all about spectacle. The one factor that is missing from this 'theatre' is the actors that are instead replaced with wrestlers, who are showmen and artists in their own right. The storylines of this 'theatre' are ongoing with it's the development of the larger-than-life heroes and anti-heroes. ...read more.

This is similar to the actor on stage, the hero wants the audience to like him and villain loves to be hated. Even though the villain is not popular with the audience it shows that the performer has been successful by doing what the director or playwright wanted. Professional wrestling today is not about winning or losing, is about entertaining the audience through what can be seen as 'physical theatre'. I would describe it to be a soap opera that takes place in a wrestling ring (the stage) with its audience 'in the round'. The WWF may have the most outrageous storylines that some people may find offensive and unbelievable, but it is all due to individual taste and preference. Many theatre critics would probably disagree with me to say professional wrestling is a new form of theatre but one believes it has all the basic elements and also a similar goal -to entertain. ...read more.