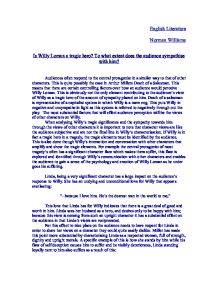 Is w***y Loman a tragic hero? To what extent does the audience sympathise with him?

English Literature Norman Williams Is w***y Loman a tragic hero? To what extent does the audience sympathise with him? Audiences often respond to the central protagonist in a similar way to that of other characters. This is quite possibly the case in Arthur Millers Death of a Salesman. This means that there are certain controlling factors over how an audience would perceive w***y Loman. This is obviously not the only element contributing to the audience's view of w***y as a tragic hero of the amount of sympathy placed on him. Death of a salesman is representative of a capitalist system in which w***y is a mere cog. This puts w***y in negative and unsympathetic light as this system is referred to negatively through out the play. The most substantial factors that will effect audience perception will be the views of other characters on w***y. When analysing w***y's tragic significance and the sympathy towards him through the views of other characters it is important to note that character views are like the audience subjective and are not the final line in w***y's characterisation. If w***y is in fact a tragic hero in a tragedy, the tragic elements must be identified by the audience. ...read more.

The effect that Linda has on the audience's perception of w***y as a hero is substantial. She also causes the audience to sympathise with him as they empathise with her. She is seen as a loyal worthy fine lady, so consequently she is respected by the audience, as well as any decision that she makes. So her decisions to love, respect and defend w***y Loman in his time of need is effects the audience. They start to see w***y as a man in need and this causes them to sympathise with him. He is also seen as a man who is going through difficulty and persevering which does cause the audience to look on w***y as a tragic hero. The fact that she goes to lengths to protect him indicates there is something there to protect. The sense of foreboding in the play does indeed mount up to the death of w***y Loman and is representative of the fall of the protagonist. The character responses to this event are dealt with in the requiem. Linda is in a state of confusion as she does not understand why w***y has done killed himself: "I don't understand it. Why did you do that? ...read more.

However Biffs view of w***y creates another perspective w***y's characterisation one that the audience does not see as a noble tragic hero and subsequently does not give w***y any sympathy. Biff understands that his father is in a state of denial and that it is his own fault: "He had all the wrong dreams. All, all wrong." Biff believes his father never really knew who he was, and his suffering was a result of this. This in effect does not portray w***y as a tragic hero as his suffering was his own fault and he was not battling against anything but himself, in Biffs' view. However it could be argued that w***y was fighting against a capitalist system that demanded he worked for material possessions. So in conclusion w***y does in fact receive sympathy from the audience as his deterioration and the loss of his son's admiration and respect, which he held so dearly, causes the audience to emphasise with him. However as w***y's downfall is self inflicted and could be seen as a selfish act, weather he is seen as a tragic hero is debateable, and is even inconsistent with other characters, so it is a largely subjective matter with fair arguments on both sides. ...read more.