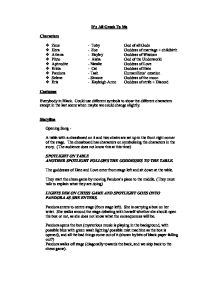 It's All Greek To Me - drama piece

It's All Greek To Me Characters * Zeus - Toby God of all Gods * Hera - Zoe Goddess of marriage + childbirth * Athena - Hayley Goddess of Wisdom * Pluto - Aisha God of the Underworld * Aphrodite - Natalie Goddess of Love * Erida - Cat Goddess of Hate * Pandora - Tash Human/Zeus' creation * Selene - Simone Goddess of the moon * Eris - Kayleigh-Anne Goddess of strife + Discord Costumes Everybody in Black. Could use different symbols to show the different characters except in the last scene when maybe we could change slightly. Storyline Opening Song - A table with a chessboard on it and two chairs are set up in the front right corner of the stage. The chessboard has characters on symbolising the characters in the story. (The audience does not know this at this time) SPOTLIGHT ON TABLE ANOTHER SPOTLIGHT FOLLOWS THE GODDESSES TO THE TABLE. The goddesses of Hate and Love enter from stage left and sit down at the table. They start the chess game by moving Pandora's piece to the middle. (They must talk to explain what they are doing) LIGHTS DIM ON CHESS GAME AND SPOTLIGHT GOES ONTO PANDORA AS SHE ENTERS. Pandora enters to centre stage (from stage left). She is carrying a box on her wrist. She walks around the stage debating with herself whether she should open the box or not, as she does not know what the consequences will be. ...read more.

Hera does not believe her and threatens her to stay away from them both or she will be sorry. Hera goes back off stage to the right (not forgetting the door) and Selene sits with her head in her hands, shaking her head in disbelief and in general. Lights down - Selene moves off stage and the table and chair are moved too. LIGHTS UP ON CHESS GAME. Hera's character is moves to the corner of the chessboard (which will symbolise a field). The goddesses could narrate by saying something along the lines of "Angrily, Hera goes to Selene's fields to show her that she is not to be messed with" LIGHTS DIM ON GAME AND THERE IS A COMPLETE SET CHANGE WHICH EVERYONE NEEDS TO HELP WITH. A CARDBOARD SHEEP AND A TREE (POLE WITH GREEN STUFF ON), BOTH WITH STANDS ARE PLACED ON THE STAGE. LIGHTS COME UP. Hera walks onto the stage and walks around the field killing the sheep by stabbing it(made out of cardboard/cotton wool?) as she walks by it. (It should fall over easily as the stands will be small). She talks to herself while she is doing this - maybe talking about why she is doing it - to warn Selene not to mess with her. (could use red lighting to show anger) FADE OUT - ALL BITS TO COME OFF STAGE AND SCENE TO BE SET AS A BEDROOM (MAYBE PAINT A SMALL SCENE SHOWING A BED (BLOW UP BED WITH SHEETS) ...read more.

Hera says that they used to be really good friend and explains about Pandora's box being opened and all the trouble it has caused. Both Athena and Eris admit to each other that they have been stupid and together, all three of them manage to stop the war. (Michael Jackson's Earth Song plays in the background) LIGHTS DOWN. Lights come up - Every character in on the stage. There is music playing in the background and everyone is in high spirits. (Lighthouse Family's "Free/One - I wish I knew how it would feel..") Lights dim on stage and up on chess game. Both the goddesses shake hands and congratulate each other on a really good game. Lights down. Lights up - Everyone is on stage (even the two goddesses who are behind the line) stood in a line at front of the stage. The Goddess of Love and the Goddess of Hate walk through the line into the front of the stage. Everyone takes a bow, the line splits and half walk off stage left, the other half, stage right and the two goddesses stay on stage. When everyone has left, the two goddesses say what the moral of the story is. (Moral - Love concerns us all, and hate won't get you anywhere in life). Possible Ending Poems 1) Mistakes are always mistakes Or so we've heard them say But if it teaches a lesson The mistake will go away. 2) So if among your travels, You find a thing unknown, Think of Pandora's box And the lesson we all were shown. ...read more.