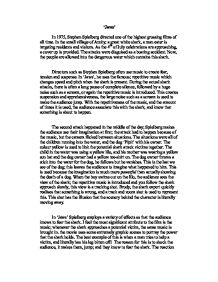 'Jaws' In 1975, Stephen Spielberg directed one of the highest grossing films of all time. In the small village of Amity; a great white shark, a man eater is targeting residents and visitors. As the 4th of July celebrations are approaching, a cover up is provided. The attacks were disguised as a boating accident. Now, the people are allowed into the dangerous water which contains this shark. Directors such as Stephen Spielberg often use music to create fear, tension and suspense. In 'Jaws', he uses the famous; repetitive music which changes speed and pitch when the shark is present. During the actual shark attacks, there is often a long pause of complete silence, followed by a huge noise such as a scream, or again the repetitive music is introduced. This creates suspension and apprehensiveness, the large noise such as a scream is used to make the audience jump. ...read more.

When the boy swims out on the lilo, the audience sees the view of the shark; the repetitive music is introduced and you follow the shark approach slowly, this view is a tracking shot. Brody, the shark expert quickly realises that something is wrong, and a track and zoom shot is used to represent this. This shot has the illusion that the scenery behind the character is literally moving away. In 'Jaws' Spielberg employs a variety of effects so that the audience knows to fear the shark. I feel the most significant attribute to the film is the music; whenever the shark approaches a potential victim, the same music is brought in. the movie uses some extremely graphic scenes to portray the power that the shark holds. The best example of this is when a man tries to help a victim, and literally has his leg bitten off! The reason for this is to shock the audience, it makes them, jump; and they know to fear the shark. ...read more.

The tension is cut by this man being attacked and the severed leg falling to the bottom of the ocean. In the last scene of the of the movie, the people who try to catch the shark attempt it with a small fishing boat, when the shark exposes itself, it is made clear that the boat is too small, and that all of the passengers are in danger. The tension is cut when one of the men on the boat is literally bitten in half! When 'Jaws' was made in 1975 it was obvious that it was ahead of its time. Spielberg employed many new ways of portraying a film. The scariest part in the film is when they are on the small fishing boat and the shark suddenly jumps out in front of Brody, this is because the tension is built up well. At the time of this film, again the yellow is used; a yellow barrel is on the boat around this time. 'Jaws' is still in the film charts even now, 30 years after. This is because of how brilliantly it was made. ...read more.