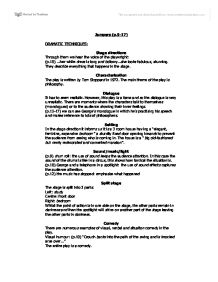 Jumpers. The play is written by Tom Stoppard in 1972. The main theme of the play is philosophy.

Jumpers (p.9-17) DRAMATIC TECHNIQUES: Stage directions Through them we hear the voice of the playwright: (p.10) ...her white dress is long and bollowy...she looks fabulous, stunning. They describe everything that happens in the stage. Characterisation The play is written by Tom Stoppard in 1972. The main theme of the play is philosophy. Dialogue It has to seem realistic. However, this play is a farce and so the dialogue is very unrealistic. There are moments where the characters talk to themselves (monologues) or to the audience showing their inner feelings. (p.15-17) we can see George's monologue in which he's practising his speech and makes reference to lots of philosophers. Setting In the stage direction it informs us it is a 3 room house having a "elegant, feminine, expensive bedroom" a sturdily fixed door opening inwards to prevent the audience from seeing who is coming in. ...read more.

Dotty appears with a beautiful white dress, whilst George wears a smoking jacket, flannels and a shabby. This could be a visual representation of his relativism. This also reflects the contrast between woman and husband and their lack of communication. LITERARY TECHNIQUES: Dotty A.K.A. Dorothy, the name Dotty can also be understood as madness the colloquial interpretation of the name. The name foreshadows both her state of mind and the mental breakdown she is bound to suffer. She is dressed in a white dress in order to reflect either innocence or how she is trapped between two worlds: relativism and the opposition of George towards it. Archie Rhymes with dandy "Archie is a dandy" makes fun of the fact that he is a dandy but also a Rad-Lib. Also brings to mind the image of an archer which comes to have a meaning further on in the play. ...read more.

The Moon * The moon is usually seen as a symbol of lunacy, madness. * The songs related to the moon are reflecting the mental breakdown which Dotty is suffering. * The conquer of the moon happens at the same time as Dotty's mental breakdown happens, she can not live with the moon being another conquer for humankind as it is destroying the idea of infinite and her imaginations about the moon, the link between the moon and herself has been violated by humankind this being an image of how humankind has entered and destroyed the purity of her mind. The songs she sings are also another reflection of the link between herself an d the moon, and she confusing between the songs shows that only she can understand the moon, this being also her own mind. Macbeth The image of Lady Macbeth is seen by the use of quotes from Macbeth being this the ultimate conclusion of Dotty loosing her mind as she is quoting her "Woe..." ...read more.