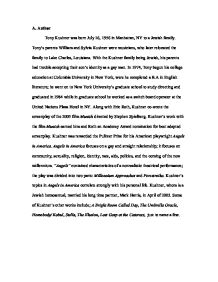 A. Author Tony Kushner was born July 16, 1956 in Manhattan, NY to a Jewish family. Tony's parents William and Sylvia Kushner were musicians, who later relocated the family to Lake Charles, Louisiana. With the Kushner family being Jewish, his parents had trouble accepting their son's identity as a gay man. In 1974, Tony begun his college education at Columbia University in New York, were he completed a B.A in English literature; he went on to New York University's graduate school to study directing and graduated in 1984 while in graduate school he worked as a switch board operator at the United Nations Plaza Hotel in NY. Along with Eric Roth, Kushner co-wrote the screenplay of the 2005 film Munich directed by Stephen Spielberg. Kushner's work with the film Munich earned him and Roth an Academy Award nomination for best adapted screenplay. Kushner was rewarded the Pulitzer Prize for his American playwright Angels in America. Angels in America focuses on a gay and straight relationship; it focuses on community, sexuality, religion, identity, race, aids, politics, and the coming of the new millennium. "Angels" contained characteristics of a nonrealistic theatrical performance; the play was divided into two parts: Millennium Approaches and Perestroika. Kushner's topics in Angels in America correlate strongly with his personal life. ...read more.

He has a look a sorrow on his face mixed with anger; a personality of a very disturbed person who has a lot of issues going on inside, someone who looks and acts depressed, scared, and mad at the world. C. The Plot Millennium Approaching starts by introducing two couples, a married straight couple and a gay couple. The gay couple is Louis Ironson a word processor who is Jewish and his partner Prior Walter. After the funeral of Louis's grandmother, Prior reveals to him that he has contracted AIDS which sends Louis into a panic and Louis feels as if he can't go on with a relationship with Prior. Louis's fear forces him to leave Prior in his time of need. The straight couple includes Joe Pitt a Mormon Lawyer and his wife Harper who is Valium addict who hallucinates very often. Joe has just been offered a job in the Justice department by Roy Cohn, a foul mouthed, narrow-minded mentor and friend of Joes. Harper does not want to move to Washington and she's not to sure of what she wants to do, she listens to her imaginary companion " Mr. Lies". Joe meets Louis at work they build a friendship on top of Louis's suspicion of Joe being gay. Harper and Prior meet in a split dream sequence where Prior reveals to Harper that her husband is a Homosexual. ...read more.

Roy Cohn was lawyer to the wealthy; Cohn claimed that he personal influenced the judge to sentence Rosenberg to death. Roy Cohn died of AIDS in 1986. E. Theme Prior seems to be the play's protagonist mainly because he is the prime victim. He suffers more in the play mentally and physically. The antagonist is Roy who hides his illness and his sexuality and belittles the person who is just like him yet open to what is happening to them. Roy is living a lie and dies powerless. The theme of the play correlates community and identity. The theme is about changing political, religious change. F. Symbolism The angel symbolizes a stop sign in Priors life, the angel tells Prior to change and to release his prophetic gift. AIDS represent identity, Prior's illness allows a door to open in his life, allowing a positive change and found prophetic ability. Harper's vision of the man with the knife hiding and Mr. Lies symbolizes her husband Joe. The man with the knife could be the secret life of Joe as being a back stabbing husband; Mr. Lies symbolizes Joe's secrets, and broken promises made to Harper. Course Final: "Angels in America" by Tony Kushner Sources: �The Creative Spirit: The Introduction to Theatre (textbook) Stephanie Arnold Chapter 11 pg. 309-369 Wikipedia, the free encyclopedia Information on Tony Kushner http://en.wikipedia.org/wiki/Tony_Kushner Angels in America/ Part I and II DVD Directed by Mike Nichols Screenplay by Tony Kushner HBO films, 2004 Home Box Office, Inc. ...read more.