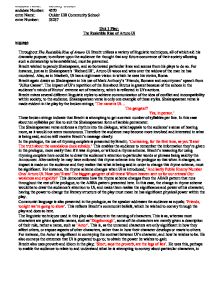 Language Throughout The Resistible Rise of Arturo Ui Brecht utilises a variety of linguistic techniques, all of which aid his dramatic purpose; to enforce upon the audience the

Candidate Name: Bethany Weston Candidate Number: 4570 Centre Name: Oulder Hill Community School Centre Number: 33237 Unit 1 Play: The Resistible Rise of Arturo Ui Language * Throughout The Resistible Rise of Arturo Ui Brecht utilises a variety of linguistic techniques, all of which aid his dramatic purpose; to enforce upon the audience the thought that any future occurrence of their society allowing such a dictatorship to be established, must be prevented. * Brecht wished to parody Shakespeare, and so borrowed particular lines and scenes from his plays to do so. For instance, just as in Shakespeare's 'Richard III', Arturo Ui woos and wins over the widow of the man he has murdered. Also, as in Macbeth, Ui has a nightmare vision in which he sees his victim, Roma. * Brecht again draws on Shakespeare in his use of Mark Anthony's 'Friends, Romans and countrymen' speech from 'Julius Caesar'. The impact of Ui's repetition of the line about Brutus is greater because of the echoes in the audience's minds of Brutus' extreme act of treachery, which is reflected in Ui's actions. * Brecht mixes several different linguistic styles to achieve communication of the idea of conflict and incompatibility within society, to the audience. ...read more.

* Brecht also uses proverb and idiom in the play; 'Short, says the proverb, are the legs of lies'. He uses this, perhaps to enable the audience to relate to and understand what he is attempting to convey about particular characters, in this case Givola: from this proverb we as the audience understand that Givola is perhaps a sly character, who's talented at using words to talk people into or out of certain situations. * The language by the characters in the play is very much colloquial to the part of America that the play is set in; Chicago. For instance when Clark exclaims to Ui in Scene Ten, 'Cool it, Ui!' This is language that is native to this part of America, and is used by Brecht to enforce a sense of authenticity into the play. This may seem ironic however, as we as an audience aware of Brecht's beliefs in epic theatre, would perhaps expect this sense of authenticity and realness not to be a significant factor to the playwright. * Brecht also employs the linguistic technique of alliteration throughout the play. For instance, in Scene 1a Flake states of Ui, 'Because, he says, the shopkeepers would rather/ buy cauliflower than coffins.' ...read more.

* Brecht utilises metaphor in this epilogue, referring to Ui as an 'ape' and fascism as 'The womb'. This expresses blatantly Brecht's views on Hitler and Ui, giving them the characteristics of apes, and perhaps more importantly articulates Brecht's moral message that people such as Hitler and Ui are being created in 'The womb' of fascism, and as long as we let them and do not resist, they will come to power again. * As well as using several linguistic techniques, we're presented with a number of literary parallels used by Brecht, which give the play a wealth of echoes, reinforcing the sense and power of the evil personified by Ui. For example, in the visit of Mr and Mrs Dullfeet to Givola's flower shop, Brecht creates a direct parallel with a famous scene, set in a garden, from Goethe's Faust, where Mephistopheles softens up Martha, as Givola does Mrs Dullfeet; 'So is a/ Beautiful woman', while Faust is preparing the ground for Gretchen's ruin. Brecht alternates the appearance of the couples, Givola and Dullfeet and Betty and Ui, just as Goethe scripts his scene. Gretchen's well-known line to Faust: 'Now tell me, how do you feel about religion?' is paralleled and extended through parody, by Brecht in the section of dialogue beginning; 'Now what, Mr Ui, does religion mean to you?' ...read more.