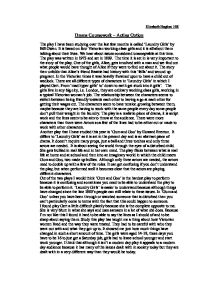 Elizabeth Hughes 10R Drama Coursework - Acting Option The play I have been studying over the last few months is called 'Laundry Girls' by Bill Owen. It is based on four Victorian working class girls and it is all about them talking about their lives. We hear about issues considered unacceptable at this time. The play was written in 1973 and set in 1899. The time it is set in is very important to the story of the play. One of the girls, Alice, gets involved with a man and we find out what people would have thought of Alice if they were to find out about it. The story then unfolds that Alice's friend Beattie had history with this 'fella' and wound up pregnant. ...read more.

There were more characters than there were Actors so a few of the lines had to be either cut or made to work with other characters. Another play that I have studied this year is 'Gum and Goo' by Howard Brenton. It differs to 'Laundry Girls' as it is set in the present day and is an abstract piece of drama. It doesn't require many props, just a ball and three torches and only three actors are needed. It is about seeing the world through the eyes of a disturbed child. She gets bullied in real life and in her own mind. The play flicks between what is real life at home and at school and then into an imaginary world in which the child meets Gum and Goo, two made up bullies. ...read more.

Because I'm not like this I found it hard to be able to say the lines as I should of and to be sharp about saying them. Study this play has taught me a thing about how Victorian women lived and the way they were treated. They had to be careful with who they went out with and what they got up to. It showed me just how much things have changed in such a short amount of time. The girls were aged 14-18, these days you have to be 16 to just get a Saturday job, girls had to leave school younger and start work younger. I think that although it isn't a modern day play it appeals to a modern day audience because it has many of the issues dealt with in society today but they are dealt with in a very different way than they would be today. ...read more.