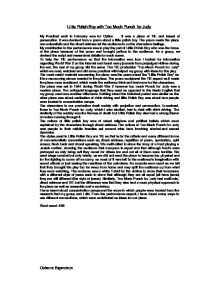 Little Polish Boy with Too Much Punch for Judy.

Little Polish Boy with Too Much Punch for Judy My Practical work in February was for Option . It was a piece of TIE and based of persecution. It was devised from a poem about a little polish boy. The poem made the piece non-naturalistic and the direct address let the audience in on the characters feelings. My contribution to the performance was to play the part of Little Polish Boy who was the focus of the piece because of the poem and brought pathos to the audience. As a group, we devised the script and researched details for each scene. To help the TIE performance so that the information was true I looked for information regarding World War 2 on the internet and found many journals from prejudged victims during the war, the rest of my group did the same. ...read more.

Nothing about the historical period was similar as the other piece was about realisation of drink driving and little Polish Boy was about how people were treated in concentration camps. The characters in our production dealt mainly with prejudice and persecution. In contrast, those in Too Much Punch for Judy, which I also studied, had to deal with drink driving. The similarity of the society was the themes of death but Little Polish Boy also had a strong theme of r****m running through it. The culture of little polish boy was of mixed religions and political beliefs which were explained by the characters through direct address. The culture of Too Much Punch for Judy was people in their middle twenties set around wine bars involving alcohol and s****l dynamics. ...read more.

No accents were used as we felt that they brought the play too far away from home and may split the audience up from what they were watching. The costume was a white T-shirt for the victims to show their innocence with a different style of jeans each to show that although they are all equal (all have jeans) they are still different (the style of jeans). Similarly, Too Much Punch for Judy had multi-role, direct address and TIE but the difference was that they also had a more physical approach to the piece as well as ensemble and a workshop. I have learnt about concentration camps and the ways in which people were treated from the research that my group and I did. From the performance aspect, I have found many ways to use different conventions, which were contributed as ideas for our piece. Word count: 655 Oc�anne Esparcieux ...read more.