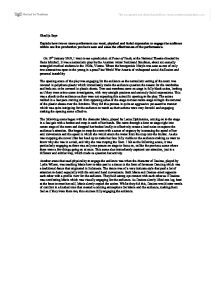 Explain how two or more performers use vocal, physical and facial expression to engage the audience within one live production you have seen and asses the effectiveness of the performance.

On 19th January 2010, I went to see a production of Pains of Youth, at the National Theatre directed by Katie Mitchell. It was a naturalistic play by the Austrian writer Ferdinand Bruckner, about six sexually entangled medical students in the 1920s, Vienna. Where the bourgeoisie lifetyle was seen as one of only two alternatives open to the young in a post-First World War Austria of widespread social disillusion and personal instability

The opening scene of the play was engaging for the audience as the naturalistic setting of the room was covered in polythene plastic which immediately made the audience question the reason for the wardrobes and beds etc. to be covered in plastic sheets. Two cast members came on stage in fully black suites, looking as if they were crime scene investigators, with very straight postures and seriously facial expressions. This was a shock to the audience as they were not expecting this scientific opening to the play. The actors walked in a fast pace coming on from opposing sides of the stage to meet centre stage to begin the removal of the plastic sheets over the furniture. They did this process in quite an aggressive yet assertive manner which was quite intriguing for the audience to watch as their actions were very forceful and engaging making the opening scene effective.

The following scene began with the character Marie, played by Laura Elphinstone, coming on to the stage in a fast gait with a bucket and mop in each of her hands. She came through a door on stage right into centre stage of the room and dropped her bucket loudly to effectively create a loud noise to capture the audience’s attention. She began to mop the room with a sense of urgency by increasing the speed of her arm movements and the speed in which she would strain the water from the mop into the bucket. As she was mopping she never lifter her head up to make her face fully visible to the audience making us want to know why she was in a rush, and why she was moping the floor. I felt as the following scene, it was particularly engaging as there was only one person on stage to focus on, unlike the previous scene where there were a few things going on at once. This scene also immediately captured our attention, just in a different and subtler way, which made us question her activity.

Another scene that used physicality to engage the audience was when the character of Desiree, played by Lydia Wilson, was teaching Marie how to take part in a dance in the form of Javanese Dancing which was a traditional dance that originated in Indonesia. The dance was of a very intricate style that paid a lot of attention to detail especially with the arm and hand movements. Both Marie and Desiree stood opposite each other with a profile view for the audience. They held strong eye contact with each other as if Desiree was comforting Marie which was visually engaging for the audience. As Desiree slowly lifted one leg, bent at the knee to meet her calf, Marie slowly copied the action. Whilst they did this, Desiree would utter words of comfort in a hushed tone that created a calming atmosphere for Marie and the audience, making them feel as if they were there too, thus success fully engaging the audience.