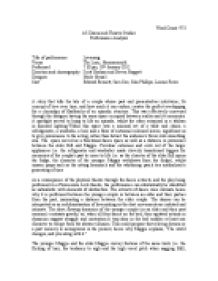 ï»¿Word Count: 973 AS Drama and Theatre Studies Performance Analysis Title of performance Lovesong Venue The Lyric, Hammersmith Performed 7.30 pm, 18th January 2012 Direction and choreography Scott Graham and Steven Hoggett Designer Merle Hensel Cast Edward Bennett, Sam c*x, Siân Phillips, Leanne Rowe A story that tells the tale of a couple whose past and presentselves intertwine; Its concept of love over time, and how much it can endure, creates the perfect overlapping for a chronolgy of flashbacks of an episodic structure. This was effectively conveyed through the designer having the same space occupied between reality and it's memories. A spotlight served to bring to life an episode, whilst the other remained in a tableau in dimmed lighting.Within this space was a minimal set of a table and chairs, a refridgerator, a wardrobe, a bed, and a floor of autumnal coloured leaves, significant as to give prominence to the acting, rather than detract the audience's focus onto something else. The space served as a functional dance space as well as a distance in proxemics between the elder Bill and Maggie. ...read more.

This could propose that reliving dreams or a past memory is incongruous in the present, hence why Maggie explains, "The world changes, and you along with it." The younger Maggie and the elder Maggie convey features of the same traits (i.e. the flicking of hair, the tendancy to sigh and the high vocal pitch when nagging Bill), however her character as a whole is distorted over time. It could be interpreted that this is due to a distinct memory loss (through hesitant speech), arthiritis (from the inability to walk in heeled shoes) and desolation of not being able to conceive- in a physical context. Analysing Maggie pyschologically, a domesticated lifestyle for a woman in the 60s was to stay at home, and look after the house and children (which is not an option considering she is infertile) which is why she became so tired with life. Moving to the United States, carrying a huge debt also puts a strain on her and Bill's relationship, which is maybe why she becomes so restless. The elder Maggie's boredom is conveyed through her physicality, which is slow and hesitant. ...read more.

images of the starlings and images of the National Geographic stone carvings in the caves of France). Through doing this, the audience gain a better perspective of the setting as the projections dominate and controll the space. This was effectively done also with the character's conciousness, as the audience can witness enlarged intimacy (i.e. an enlarged hand running over the stone carvings). The background music effectively signified key moments by changing a scene's mood to support its emotion and additionally transitioned scenes to merge within themselves to express a sense of consistancy, which plays an overiding theme within the play. Personally from my undersatnding, with the themes of time, consistancy, and how love can endure that, I think Graham and Hoggett's main focus was to enable the audience's attention onto how the actor's portayed that, as the there is not a traditional plot to the play. Through their abstract movements and relationships towards one another, the director's effectively signify how love overcomes the pettiest to the greatest of things, for example Bill's jealousy over Maggie dancing with a fellow work colleague, and Maggie's insecurities over the financial stability and Bill's drinking habits. It is for the audience to decide whether the ambiguity within that created either an unstable relationship or a strong attachment between two people. ...read more.