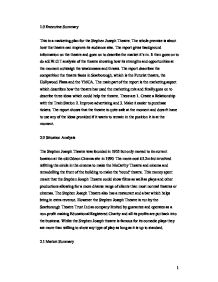 1.0 Executive Summary This is a marketing plan for the Stephen Joseph Theatre. The whole premise is about how the theatre can improve its audience size. The report gives background information on the theatre and goes on to describe the market it's in. It then goes on to do a S.W.O.T analysis of the theatre showing how its strengths and opportunities at the moment outweigh the weaknesses and threats. The report describes the competition the theatre faces in Scarborough, which is the Futurist theatre, the Hollywood Plaza and the YMCA. The main part of the report is the marketing aspect which describes how the theatre has used the marketing mix and finally goes on to describe three ideas which could help the theatre. These are 1. Create a Relationship with the Train Station 2. Improve advertising and 3. Make it easier to purchase tickets. The report shows that the theatre is quite safe at the moment and doesn't have to use any of the ideas provided if it wants to remain in the position it is at the moment. 2.0 Situation Analysis The Stephen Joseph Theatre was founded in 1955 but only moved to its current location at the old Odeon Cinema site in 1990. The move cost �5.2m but involved refitting the circle in the cinema to make the McCarthy Theatre and cinema and remodelling the front of the building to make the 'round' theatre. This money spent meant that the Stephen Joseph Theatre could show films as well as plays and other productions allowing for a more diverse range of clients than most normal theatres or cinemas. The Stephen Joseph Theatre also has a restaurant and a bar which helps bring in extra revenue. However the Stephen Joseph Theatre is run by the Scarborough Theatre Trust Ltd as company limited by guarantee and operates as a non-profit making Educational Registered Charity and all its profits are put back into the business. ...read more.

They mainly show pantomimes, which only run for a few days at a time. 2.4 Services Offered The Stephen Joseph Theatre has many things to offer to the general public. They aim to show ten plays a year, with late night and lunchtime shows as well. The cinema shows a different show every month with special show being shown when the right ones come out. The theatre also holds music events and has a shop selling memorabilia. The restaurant caters for most events including weddings, seminars, conferences, meetings, birthdays, anniversaries, christening parties and charitable events. The restaurant also holds special gourmet nights when they specialise in Greek, Italian and a special Orient Express meal. The theatre offers reductions to a number of people, those over 60 and retired, people receiving unemployment benefits or a disability allowance, to full time students and to anyone under 16. They all receive �2 discount on theatre tickets for any Stephen Joseph production, not all performances, and selected touring and music events. The theatre also offers, sponsored by McCain's, a teen ticket anyone aged between 13 and 19 only pay �5 for a ticket, this isn't available in group bookings or on Saturday's. There are also regular backstage tours which allow visitors to see behind the scenes for only �3. The theatre, in order to get across to everyone, is willing to send someone to give a talk to groups or clubs, as long as enough notice is given. But perhaps the most unique service the Stephen Joseph Theatre offers is the after show follow up. After the performance, on specified evenings, the members of cast and all others involved in the production will stay on stage and answer any questions on the performance. The amazing thing about this is there is no extra cost, all the audience has to do is stay in their seats after the show has finished. ...read more.

3.4 Implementation The first step would be to see if the train station was willing to co-operate in a trial period of no less than three months. If very few people used the service there wouldn't be much harm done but if it was a success both firms would benefit. The advertising section would be expensive because of the need to make people in York aware of the offer on the trains. Advertising would have to be put up in York as well as in the local paper in York. Whilst being expensive it could also prove worthwhile advertising on the local radio station, York Minster. The advertising in Scarborough wouldn't cost as much as it is unlikely the university, school or library would charge. However the posters would have to be designed for each individual area showing all the discounts available to the potential customers. The newspaper would be pleased to get the opportunity to preview a show as it would give them a unique view of the play. Unfortunately in order for this to work a journalist would have to sit in on a dress rehearsal of the play so he knew what to write. In order to sell tickets on-line the theatre would have to alter some of its website, however this can be easily done and wouldn't cost a lot. As an introductory offer the theatre might not charge post and packaging for tickets ordered on-line but in time place a small charge on the service. 3.5 Contingency Plan Luckily none of these ideas if they failed would cause the theatre to become bankrupt. Nevertheless if the theatre wants to increase its number of customers it has to take some sort of risk. The worst possible outcome would be that the theatre would have no marketing budget available. In this case the theatre could use its previous funders to see if they can help out in return for advertising in the programmes sold at plays. This should bring in enough money for the theatre to continue advertising in the local paper and around the outside of the theatre. 4. ...read more.