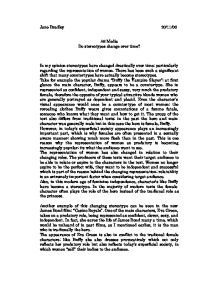 Jane Bradley 20/11/06 A2 Media Do stereotypes change over time? In my opinion stereotypes have changed drastically over time; particularly regarding the representation of women. There has been such a significant shift that many countertypes have actually become stereotypes. Take for example the popular drama "Buffy the Vampire Slayer"; at first glance the main character, Buffy, appears to be a countertype. She is represented as confident, independent and sassy, very much the predatory female, therefore the opposite of your typical attractive blonde women who are generally portrayed as dependent and placid. Even the character's visual appearance would once be a countertype of most women; the revealing clothes Buffy wears gives connotations of a femme fatale, someone who knows what they want and how to get it. ...read more.

This is one reason why the representation of women as predatory is becoming increasingly popular; its what the audience want to see. The representation of women has also changed in relation to their changing roles. The producers of these texts want their target audience to be able to relate or aspire to the characters in the text. Women no longer aspire to be the perfect wife, they want to be independent and successful which is part of the reason behind the changing representation; relatablity is an extremely important factor when considering target audience. Also, in this modern age of feminine independence, character's like Buffy have become a stereotype. ...read more.

The appearance of Eva Green is also in conflict to the tradional female characters; like Buffy she also dresses provocatively which not only reflects her predatory role but also reflects today's superficial society, in which women "sell" their bodies to the audience. As you can see this character is extremely similar to Buffy, and indeed many other modern day representations, which is why it has developed from a countertype into a stereotype. I believe that this change in stereotype is reflective of today's audience, women today aspire to a very different representation than that of their mothers and grandmothers, and the media of course must keep up with their target audience's demands. ...read more.