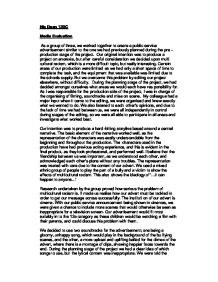 Nic Dean 12BC Media Evaluation As a group of three, we worked together to create a public service advertisement similar to the one we had previously planned during the pre-production stage of the project. Our original intention was to produce a project on anorexia, but after careful consideration we decided upon multi cultural r****m, which is a more difficult topic, but really interesting. Certain areas of our production were limited as we had only a short space of time to complete the task, and the equipment that was available was limited due to the schools supply. But we overcame this problem by editing our project elsewhere, without difficulty. During the planning stage of the project, we had decided amongst ourselves what areas we would each have responsibility for. As I was responsible for the production side of the project, I was in charge of the organising of filming, soundtracks and mise on scene. ...read more.

The representation was treated with care due to the content of our advert. We used a mixed ethnic group of people to play the part of a bully and a victim to show the effects of multicultural r****m. This also shows the ideology of '...it can happen to anyone...' Research undertaken by the group proved how serious the problem of multicultural r****m is. It made us realise how our advert must be tackled in order to get our message across successfully. The institution of our advert is cinema. With our public service announcement being shown in cinemas, we were given a chance to include more scenes that would otherwise be seen as inappropriate for a television screen. Our advertisement would fit most suitably in to the 12a category as these children would be watching a film with their parents, and could discuss this problem with them. ...read more.

We used these to their best possible effect, with the advert being consistent and each scene lasting approximately the same amount of time leading into the next one. The transcripts we used in our advertisement were contemporary and realistic. They were statistics that we had researched, and we used them as a shock tactic to show the audience how severe multicultural r****m is. We came across some major problems when transferring our footage on to the computer and after many attempts and lots of time wasted; we decided to use a different computer. Although this was a huge setback, I am extremely pleased with the final outcome of our production. I feel that we have worked well as a group and our production contains some very good elements that work successfully in relation to how we planned it. The soundtracks compliment the whole piece, and I feel that the transformation from pre-production to the end result has been effective, and the final product is professional and accurate. ...read more.