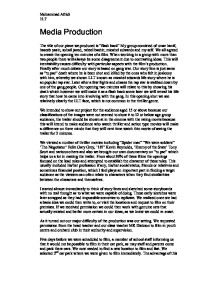 Media Production The title of our piece we produced is "flash back" My group consisted of umar hanif, haseeb yasin, sohail javed, raheel bashir, micahel edwards and my self. We all agreed to create the opening ten minutes of a film. When working in a group with more than two people there will always be some disagreement due to contrasting ideas. This will inevitability causes difficulty with particular aspects with the film's production. Finally after much debate our story is based on gang war. Our story line is just same as "tu pac" death where he is been shot and killed by the ones who felt in jealousy with him, whereby we shown LLT known as micahel edwards life story where he is an popular rap star. Later after a few fights and chases the rap star is stabbed down by one of the gang people. Our opening two minutes will relate to this by showing his death which however we will make it as a flash back scene later we will reveal his life story that how he came into involving with the gang. In this opening shot we see relatively clearly the LLT face, which is not common in the thriller genre. ...read more.

Five days before we were scheduled to film, a member of school staff informing us that it would not be possible to film in their car park, as may staff and parents come and park there cars. We now needed to find a new location to film and fast. We selected 2nd car park where we were given to film immediately. The advantage of this location was its proximity. We had to develop some shots, which caused us to alter our storyboards, perhaps for the better. An example of this would be as the victim walks to the orchard in the entrance. However we found the victim was too distant from the camera and although signs of isolation may have been connoted in this shot, it wasn't what we were looking for. Also to have zoomed in on the victim, which would have caused the victim to be more prominent in the shot appeared extremely amateurish so we needed to invent a new scene but after some discussion with our teacher he let us to go ahead with the shot. One thriller convention that we discovered was to film just the underneath feet of my self in the car when the gang is following LLT to the orchard club this causes the audience to use their imagination as to what might happen next where he is going. ...read more.

I feel transitions are equally as important as the images, as they set the pace of the film because no matter how much action you may have in a particular shot, if the shots are cut together using dissolve transitions the images lose their strength. Also other connotations may be presented rather than the ideas the director had in mind. On the other hand if too much thought is put into the transitions the audience will lose concentration from the film itself. The music is rap throughout which makes the film more personal as everything and is basic concept for being a thriller. The lacking factor that was apparent was our time management. It would have been impossible to set a time plan although we did have a basic one. However we all had different commitments at various times. Instead of a time plan we should have written down the exact time of day we needed to film what scenes, this would have saved time travelling up and down to Orhcard club to film a shot which we forgot to do. We have acquired a lot of skills over the period of construction and editing, ranging from computing skills to lighting expertise. This has given us a better knowledge of the practical side of media causing us to understand why media is such a big part of our everyday life. Mohammad Afridi 11.7 ...read more.