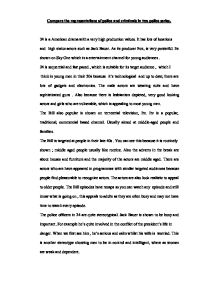 Messages and Values in police/cop shows

Compare the representations of police and criminals in two police series. 24 is a American drama with a very high production values. It has lots of locations and high status actors such as Jack Bauer. As its producer Fox, is very powerful. Its shown on Sky One which is a entertainment channel for young audiences . 24 is sequential and fast paced , which is suitable for its target audience , which I think is young men in their 20s because it's technological and up to date; there are lots of gadgets and electronics. The male actors are wearing suits and have sophisticated guns . Also because there is lesbianism depicted, very good looking actors and girls who are vulnerable, which is appealing to most young men. The Bill also popular is shown on terrestrial television, Itv. Itv is a popular, traditional, commercial based channel. Usually aimed at middle-aged people and families. ...read more.

The first male officer we see in The Bill is quite different to Jack Bauer. We see him eating junk food and quite laid back when his female colleague is more focused on the job. For example, the woman knows what she's supposed to be doing when they get told to go on a job but the man is looking confused. The Bill has another subverted stereotype by having a middle aged female officer who is intelligent and confident as the main character. Usually men are the focus of attention.If a woman is the main character she usually is seen as a weak, or in a bad limelight. The woman, who is played by June Ackland , speaks with received pronunciation to a man who speaks in slang. Normally women are the ones who are shown to be inarticulate and dumb. In 24 the majority of the characters are middle class who speak properly. ...read more.

It has stereotypical situations such as young, rich, pretty girls being kidnapped by men and men hitting women. However, there is a situation when a woman is in control and the man she is talking to panicking and angry. 24 tries to attract the mainstream audience by having different issues such as lesbianism, parents worrying about their children, Jack Bauer having love issues. The Bill does this by having actors speak in different regional accents. The Bill tries to be multicultural by having a couple of Asian police officers in the background but the majority of the characters are white; this explains why its shown in Itv a very traditional channel. There is, though, an Asian man, with no accent and a proper role who is portrayed as being brave, which is unconventional. I think the representations of police officers and criminals by the two shows are very different .24's representations are a lot more stereotypical than The Bill. The representations may be different but their aim, which is to entertain, is the same. ...read more.