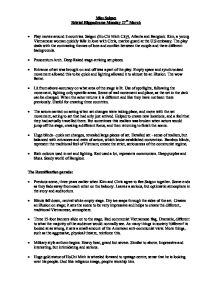 Miss Saigon Bristol Hippodrome Monday 17th March * Play moves around 3 countries. Saigon (Ho Chi Minh City), Atlanta and Bangkok. Kim, a young Vietnamese woman quickly falls in love with Chris, marine guard at the U.S embassy. The play deals with the contrasting themes of love and conflict between the couple and there different backgrounds. * Proscenium Arch. Deep Raked stage-striking set pieces. * Entrance of set was brought on and off was a part of the play. Empty space and synchronised movement allowed this to be quick and lighting allowed it to almost be an illusion. The wow factor. * Lit from above-accuracy on what area of the stage is lit. Use of spotlights, following the movement, lighting only specific areas. Sense of real movement and place, as the set in the dark can be changed. When the actor returns it is different and like they have not been there previously. Useful for creating three countries. * The actors carried on acting when set changes were taking place, and move with the set movement, acting to set that had only just arrived. Helped to create new locations, and a feel that they had actually travelled there. But sometimes this realism was broken when actors would jump off the stage, creating a different focus, and then returning to finish the scene. * Huge blinds- quick set changes, revealed large pieces of set. Detailed set - sense of realism, but balanced with entrances and exits of actors, which broke established convention. Bamboo blinds, represent the traditional feel of Vietnam; create the strict, seriousness of the communist regime. * Rich colours used in set and lighting. Red used a lot, represents communism. Deep purples and blues. Seedy world of Bangkok. The Reunification parade: * Previous scene, three years earlier when Kim and Chris agree to flee Saigon together. Scene ends as they fade away from each other on the balcony. ...read more.

Stereotypical behaviour of teenage drinking culture. > Boys enter on mimed motorbikes to accompanying distorted, manic, drunken music. Girls jump on back, in movement and voice seem carefree. > Arrive at pub. Location in a crowed environment created by close interaction, loud voice, limited movement. All four characters have close interaction with the audience. > Girls being 'laddish' challenging stereotype, winking at boys in the audience. Use contemporary references to relate to audience eg Ali G Harry Enfield. Draws the audience into production. Enjoy the characters company. > Chanting 'Whisky, vodka, lager, beer' in choral voice. Strong aggressive, physical positions by facing directly to the audience. This begins with a light tone, then becomes much more harder and aggressive, then stops. Jo says, "you drive" to Judy. Long pause and the tension is high after lots of pace and movement to stillness. The keys are thrown to her. Then cuts to the next scene, which starts the tragic story. > Do you say yes? Scene very important, it is repeated at the end, for audience to reflect on it in a different light. Chanting before may have been conceived of as funny, but at the end the chanting seems harsh and upsetting, even as though they are being silly, drinking too much. The message has got through to the audience. Chris informing mother of death of Jo: > Contrast to opening scene. Demands on actors to create and intimate scene between two characters in a large empty space. Balance of seriousness of the policeman's job, but also the grief and sympathy as he is a family friend, this is a complex emotion to act. > Officer forces audience to listen rather than sympathise. Narrates the facts of the situation, his tone of condemnation and anger towards Judy's stupidity. Walks with a serious, slow pace. Agitated, annoyed, but trying to keep calm. > Entrance at door. ...read more.

This was used in the love scene between Miranda and the Captain, to create the famous balcony scene from Romeo and Juliet. > Almost like a rainbow above the set has arcs of coloured lights stretching from stage left to right. Makes stage very bright, and futuristic, because it is not the normal lighting of that time. > Snap blackout at end of 1st half, in time with last drumbeat. Audience excited and exhilarated. > The main acting areas are downstage (a strip at stage level), centre stage (a raised area containing drum kit and the platform and balconies). Allows action to take place on different levels, to create the feeling that they are not on the stage, they are in a spaceship. > At one point huge monster tentacles come through the portholes round the outer walls of the spacecraft. Unrealistic, therefore humorous, but exciting as well, along with the loud music, and shaking set (created by strobe lights) > Impressive, detailed set, looked expensive, but a little fake, the use of hair dryers as guns - parodying low budget science fiction films of 1960's. > All music played live. > Costume - Capt and Crew - Blue suits, silver shoulder bibs. Back boots, some with caps. Capt has peaked hat and pipe. Cookie - blue suit, white apron, and sailors hat. Gloria - Blue suit, short skit, high heels, glasses. Then in second half, the skirt becomes angled, with a zig-zag hemline, reveals one leg. Miranda - Pink blouse, silver dress, white pumps and socks, gives her a very young appearance. Later dresses up as Marilyn Monroe to impress the Capt wears shiny, gold, revealing dress, high heels and make up. Ariel - completely silver, to create being made of metal, bulbous joints, tubes and wires, LED display on his front. Prospero - Suit covered by white, doctors coat, grey trousers and waistcoat, shirt. Neat professional appearance. Authoritative. Later rips off hiss coat to reveal pink long jacket, back collar and lapels, reminiscent of the 'teddy boy' era. ...read more.