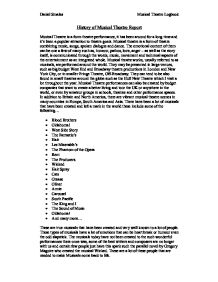 History of Musical Theatre Report Musical Theatre is a form theatre performance, it has been around for a long time and it's been a popular attraction to theatre goers. Musical theatre is a form of theatre combining music, songs, spoken dialogue and dance. The emotional content of them can be one a few of many such as, humour, pathos, love, anger - as well as the story itself, is communicated through the words, music, movement and technical aspects of the entertainment as an integrated whole. Musical theatre works, usually referred to as musicals, are performed around the world. They may be presented in large venues, such as big budget West End and Broadway theatre productions in London and New York City, or in smaller Fringe Theatre, Off-Broadway. They can tend to be also found in small theatres around the globe such as the Hull New Theatre which I visit a lot throughout the year. Musical Theatre performances can also be created by budget companies that want to create a better living and tour the UK or anywhere in the world, or even by amateur groups in schools, theatres and other performance spaces. ...read more.

New York runs continued to lag far behind those in London, but Laura Keene's "musical burletta" Seven Sisters shattered previous New York records with a run of 253 performances. How Musical Theatre Developed Comedy The first theatre piece that conforms to the modern conception of a musical, adding dance and original music that helped to tell the story, is generally considered to be The Black Crook, which premiered in New York on September 12th 1866. The production was a staggering five-and-a-half hours long, but despite its length, it ran for a record-breaking 474 performances. The same year, The Black Domino/Between You, Me and the Post was the first show to call itself a "musical comedy. This was to become the longest performances on stage for some time. At that time, in England, musical theatre consisted of mostly of music hall, adaptations of risqu� French operetta and burlesques, notably at the Gaiety Theatre beginning in 1868. I have experience in Music Hall I have been to see a performance which was in November 2007 at Leeds City Variety which I thought was a brilliant performance and a good show to watch. ...read more.

The musical is set during wartime, where a group of three sailors are on a 24 hour shore leave in New York. During their day, they each meet a wonderful woman. The women in this show have a specific power to them. The Boy Friend ran for 2,078 performances in London, briefly becoming the third-longest running musical in West End or Broadway history (after Chu Chin Chow and Oklahoma!), until it was demoted by Salad Days. It marked Julie Andrews American debut. Another record was set by The Three penny Opera, which ran for 2,707 performances, becoming the longest-running off-Broadway musical until The Fantastic's. As in Oklahoma!, dance was an integral part of West Side Story, which transported Romeo and Juliet to modern day New York City and converted the feuding Montague and Capulet families into opposing ethnic gangs, the Sharks and the Jets. West Side Story had a respectable run of 732 performances (1,040 in the West End), while The Music Man ran nearly twice as long, with 1,375 performances. However, the film of West Side Story was extremely successful. The history of Musical theatre is a powerful history and has been a very challenging career option. Some people would have made it to the top through the right contracts and sometime that was famously talented. ...read more.