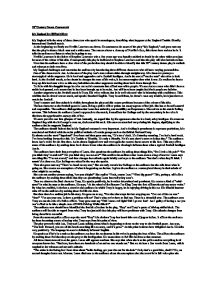 My England by Clifford Oliver

20th Century Drama Coursework My England by Clifford Oliver My England tells the story of three characters who speak in monologues, describing what happens at the England-Tunisia friendly international football match. At the beginning we firstly see Neville Lawrence sat down. He announces the name of the play "My England," and goes onto say that the play is about a black man and a white man. The camera shows a close up of Neville's face, this shows how serious he is. It tells the audience to listen to what he is going to say. Neville Lawrence is the father of Stephen Lawrence who a few years ago was brutally stabbed to death by six other white men just because of the colour of his skin. Consequently this play is dedicated to Stephen Lawrence and that the play will also include r****m. Now that the audience have a clear view of the production they should be able to identify that this 20th century drama play is realistic and relevant to their own lives. My England challenges and entertains the audience by introducing three different characters who all have varying personalities. One of the characters is Ant. At the start of the play Ant's true colours shine through straightaway. His character portrays a stereotypical white supporter. He is loud and aggressive and a football hooligan. Ant is the sort of "macho man" who tries to look hard. At the football match, as he chants he changes the tone of his voice, it becomes rougher then what it was. He realizes he has to keep up this hard man voice as this may intimidate the other supporters making them back down through fear. To fit in with his thuggish image he cries out racial comments that offend non-white people. We see Ant as a man who didn't have a stable background, so it seems that he has been brought up to be r****t. ...read more.

This affects the audience by making them detest Ant, additionally. They see he only cares about himself and "his England." Then the game starts and all the characters are at the football ground. Ant uses his eyes to show the audience he is looking up at all the other supporters even though there is nobody there except him, Tony and Laura. Dramatic tension is created when England score an early goal. Ant goes berserk, he shouts out "You're not singing, you're not singing, you're not singing anymore!" Ant continues to chant racial remarks to the Tunisia supporters and players and even people who are supporting England. "Referee!" Did you see that? You cheating black slag get him off! The audience hear by what Ant has just said that every time he repeats something r****t it gives them a true reason to hate Ant even more. This affects the audience by making Ant's character believable and not wanting to meet someone like him in real life. It gets to the point where Tony cannot take anymore of Ant's r****t rubbish. He angrily says "There's a geezer, a white geezer, a few rows from me. Keeps standing up, shouting, r****t c**p, keeps shouting. Sit down! Then it's me. "Who let the monkey in here?" What did you call me? He can't do that." Naturally at this point Tony becomes somewhat furious. He isn't going to tolerate someone shouting racial statements like "Who let the monkey in here?" It shows a different side of Tony to how he has gone from being calm and collected to becoming extremely cross. This affects the audience by seeing a stronger side of Tony. The audience sees him at the beginning as a relaxed person but as the play has progressed Tony has seemed to become more assertive and now only at this point he is furious. But Tony does go too far when he says "Oi! ...read more.

He starts to feel nervous and afraid as he explains the story to Tony. He also becomes a different character when he acts out his mum, the tone of voice he portrays sounds soft yet harsh. Ant uses his eyes as an innocence part to express his guilelessness. When Ant depicts his dad he uses a hard stare which looks frightening. Right at the end of the flashback Ant's face is a lot darker then before his eyes are grim and his teeth are clenched. His dad says, "Next time, hit him first." The fight Ant was involved in was between him and an Asian which Ant's dad didn't approve and seeing Ant with a black eye. So his dad gives him a taste of his own medicine and hits him. This episode of Ant's childhood will affect them by making them feel sorry for Ant. It makes them pity him. It teaches us much about Ant's past that he hasn't grown up much. His dad has brought him up to be r****t. As it draws nearer to the end of the play Tony and Ant end up having a fight and get arrested by Laura. "If you don't like it you shouldn't of come," This is the quote both Ant and Tony use. Ant tells Tony if he can't take the r****m at football matches he shouldn't of come. Tony says that if you can't accept that England is a multi-cultural society you shouldn't of come. The repetition of the phrase creates dramatic irony. This idea echoes the title of the play "My England." The writer seems to be asking the almost rhetorical question "who does England belong to?" The audience has witnessed through Ant and Tony's mutual love of football they have seen an insight into each other's worlds and the tension rises showing this play has erupted into an explosive finish. At the end of the production we hear Bob Marley's Redemption song. Redemption means to atone or make up for. The play is dedicated to the life of Stephen Lawrence. ...read more.