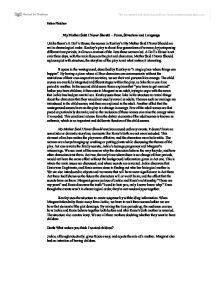 My Mother Said I Never Should - Form, Structure and Language

My Mother Said I Never Should - Form, Structure and Language Unlike Ibsen's A Doll's House, the scenes in Keatley's My Mother Said I Never Should are not in chronological order. Keatley's play is about four generations of women; by juxtaposing different time periods, it allows a contrast of the lives these women led. A Doll's House is set over three days, with the main focus on the plot and characters. Mother Said I Never Should replaces plot with structure; the storyline of the play is not what makes it interesting. It opens in the wasteground, described by Keatley as "a magic place where things can happen". By having a place where all four characters can communicate without the restrictions of their own respective societies, we see their real personalities emerge. The child scenes are carefully integrated at different stages within the play, as links from one time period to another. In the second child scene Rosie explains that "you have to get married" before you have children; it then cuts to Margaret as an adult, trying to cope with the news that Jackie has had pre-marital s*x. Keatley uses these links in the structure to reveal things about the characters that they would not usually reveal as adults. Themes such as marriage are introduced in the child scenes, and then are explored in the adult. Another effect that the wasteground scenes have on the play is a change in energy. Few of the adult scenes are fast-paced or particularly dramatic, and so the inclusion of these scenes can raise the energy when it is needed. ...read more.

The ending also creates dramatic irony, in that we see the aims and ambitions one character had, knowing that she will never fulfill them. Unlike Ibsen's A Doll's House, Keatley's claims to not use naturalistic language in My Mother Said I Never Should. Despite the use of informal, contemporary language including slang, "f*****g brill!" the majority of the dialogue is littered with subtext, and each line is carefully chosen to convey certain themes. Rosie She needs... Margaret What does she need? This piece of dialogue shows Margaret's resentment for Jackie; when performing the scene, I'd imagine her saying it particularly bitterly. The interruption followed by the question suggests she is impatient, and is taking her anger out on Jackie. Rosie however, does not pick up on this point, and answers the actual question, creating dramatic tension. Keatley clearly shows a contrast between each character's style of language, as well as the same character at different ages. Because the play is not in chronological order, it is possible to compare the language characters use at different ages. In the final scene of the play, we see an enthusiastic and optimistic Doris "This is the beginning of my life!" However, in Act one, scene 2, set some years later, she is almost the complete opposite. When attempting to get a young Margaret into bed, she avoids certain conversation topics, and is very impersonal: Margaret Do you.....do you? Doris I'm saying goodnight now. This contrast of language and behaviour emphasises the unrealistic expectations Doris had of married life, and she even admits this later on "You expected too much. ...read more.

Other characters have the same difficulty when talking to Rosie, especially Jackie. She is forced to talk to her as a sister rather than as a daughter, and ends up with a combination of both "Well you shouldn't! NEVER, ever -". This leads to Rosie being confused about their relationship; she seems to either hate or idolise Jackie. At age 8, she claims she hates her, yet at age 15, she wants to move in with her. Doris is the only character who manages to talk to her at the same level; when they speak, the age gap is not apparent. Doris They work too hard. Rosie You shouldn't wind them up. At some point in the play, every character does speak truthfully, and reveal their genuine emotions. Some manage it in dialogue, such as Rosie and Doris "My outside's the same as my inside. That's why when I talk Mum thinks I'm being rude", yet others are only honest in their monologues. In Act one scene nine, Margaret is concealing the birth of Rosie from Doris, who is one the phone. When performing this scene, I played Margaret, and tried to emphasise her dishonesty by using contrasting facial expressions from the language. I wanted to make it seem I was thinking of excuses during the pauses in the conversation. The first three generations suppress their anger and resentment through use of sarcasm and clich�s, while Rosie refuses to play their games, and questions them, Doris Well, Rosie will need bed linen Rosie What for? Doris You never know. Rosie I've got a duvet. Margaret Rosie. Rosie I have! Helen Fletcher ...read more.