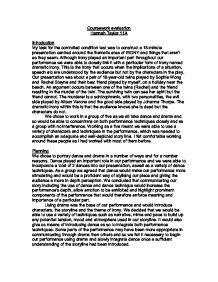 My task for the controlled condition test was to construct a 15-minute presentation centred around the thematic area of IRONY and things that aren't as they seem.

Coursework evaluation Hannah Taylor 11A Introduction My task for the controlled condition test was to construct a 15-minute presentation centred around the thematic area of IRONY and things that aren't as they seem. Although irony played an important part throughout our performance we were able to closely link it with a particular form of irony named dramatic irony. This is the irony that occurs when the implications of a situation, speech etc are understood by the audience but not by the characters in the play. Our presentation was about a pair of 18-year-old twins played by Sophie Wong and Rachel Steyne and their best friend played by myself, on a holiday near the beach. An argument occurs between one of the twins (Rachel) and the friend resulting in the murder of the twin. The surviving twin can see her spirit but the friend cannot. The murderer is a schizophrenic, with two personalities, the evil side played by Alison Verona and the good side played by Johanna Thorpe. The dramatic irony within this is that the audience knows she is dead but the characters do not. We chose to work in a group of five as we all take dance and drama and so would be able to concentrate on both performance techniques closely and as a group with no interference. Working as a five meant we were able to use a variety of characters and techniques in the performance, which was needed to accomplish an adequate and well-depicted story line. I felt comfortable working around these people as I had worked with most of them before. Planning We chose to portray dance and drama in a number of ways and for a number reasons. Dance played an important role in our performance and we were able to incorporate a total of 2 dances into our presentation, aswell as a variety of dance techniques. ...read more.

We created a different setting of the beach to make the audience more aware that we were on holiday and opened the scene with the twin and the friend sitting in complete silence, sat apart and motionless. This built up a query of what was happening and created a heavy atmosphere with suspense of who would talk first. We developed the dialogue, still using the argument but making it more fierce and tense for the other twin sitting between the two. We then incorporated a freeze-frame and included our idea of the picture on the OHP. During week 6 we added a new scene which was the high point of the drama where major clues were given away indicating the girls death. We called this the breakfast scene and used this setting, as it was one that all 3 girls could be included in an environment where a perspective could be added of myself not seeing the dead twin. We also decided that the schizophrenic would have 2 personalities because it would make the character more interesting and allowed us to use techniques such as characterisation, mime for the side of the character not acting and integration of 2 characters into one. We then added a news report scene, which was for the purpose of audience awareness. We included mime of my character around the news reporter. During these two scenes we incorporated techniques such as a use of pace to build up tension among the characters, a variety of tones of voice to further enhance our character portrayal and their feelings and a range of facial expressions to again highlight feelings of confusion and anger. Initially we connected this scene with a confrontation between myself and the schizophrenic, however we felt that it would be more effective if we were to divulge a little more information to the audience and so we incorporated a 'packing scene' whereby the tension among all the characters is shown at its height. ...read more.

We made sure that our scenes flowed with one another I think this was effective because it ensured that there were two ways of portraying the meaning of a scene in one scene in a stimulating way. Conclusion Overall, I was very pleased with the outcome of our performance, the way in which we worked as a group and how we tackled any difficulties on stage. I think as a group we had more strengths than weaknesses particularly in the development and presentation stages of the project. We were able to work effectively as a group, putting our ideas together and voicing our opinion if we thought anything should be changed or added. We used our time competently and evenly distributed the roles of characters and when they would appear on stage. However, we encountered a few weaknesses and these appeared particularly in the performance whereby we rushed slightly, as we were aware the time limit. We also found it difficult to sit down and discuss an idea without the aid of dramatic improvisation which was contained in the criteria of the project and I don't think this was beneficial to our performance as from the beginning of the project we never had a definite outline of our storyline. I enjoyed playing my character, as I was able to explore a range of moods and play a character having to act round someone who wasn't there from my perspective. This was quite challenging at first but as the weeks progressed I became used to using this technique. However, I don't think my character had much of an in depth personality, as it was quite like myself in real life- a teenager. This prevented me from exploring different characters, which perhaps would have held more interesting characteristics. Having said this, I was able to use a variety of facial expressions and take part in an assortment of different environments within a scene. Next time I would prefer to play a character more challenging that I have little in common with so as to assist me practicing different techniques within drama. ...read more.