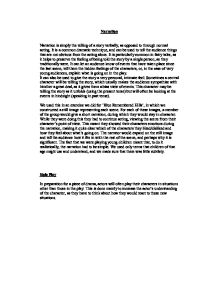 Narration is simply the telling of a story verbally, as opposed to through normal acting. It is a common dramatic technique, and can be used to tell the audience things that are not obvious from the acting alone.

Narration Narration is simply the telling of a story verbally, as opposed to through normal acting. It is a common dramatic technique, and can be used to tell the audience things that are not obvious from the acting alone. It is particularly common in fairy tales, as it helps to preserve the feeling of being told the story by a single person, as they traditionally were. It can let an audience know of events that have taken place since the last scene, tell them the hidden feelings of the characters, or, in the case of very young audiences, explain what is going on in the play. It can also be used to give the story a very personal, intimate feel. Sometimes a central character will be telling the story, which usually makes the audience sympathise with him/her a great deal, as it gives them a bias view of events. ...read more.

The fact that we were playing young children meant that, to do it realistically, the narration had to be simple. We used only terms that children of that age might use and understand, and we made sure that there was little subtlety. Role Play In preparation for a piece of drama, actors will often play their characters in situations other than those in the play. This is done mainly to increase the actor's understanding of the character, as they have to think about how they would react to these new situations. Still Image To create a 'still image' the actors involved simply adopt the position and expression of their character at a single moment from a scene. We have used this technique on a number of occasions as preparation for a performance. The most recent example was in preparation for a peace from 'Blue Remembered Hills', during which we, as a group, created a single still image from each scene of the play. ...read more.

In scene four, the boys drive a squirrel out of a tree, and eventually kill it. All the boys feel driven and afraid/guilty to different degrees, and this had to be shown in the image. The point we chose was that of the boys charging towards towards the squirrel, as their positions would show their eagerness. Peter, naturally, is leading the attack, followed by John, then a reluctant w***y. Raymond is making a feeble attempt to hold them back. This was a slight modification of the stage directions, but we felt it was the best way to give the gist of the scene. I found that using still images gave us the opportunity to put considerably more thought into facial expressions, which may not have been present had we been acting the scene normally. Once we were into the chosen positions our expressions were all we had to consider, and that seemed to be very helpful. ...read more.