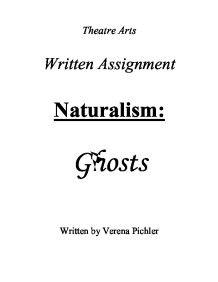 Theatre Arts Written Assignment Naturalism: Ghosts Written by Verena Pichler Naturalism came into being in the 19th century when authors and playwrights started to do something against the social situation back then. In contrast to the plays people wrote before, naturalists focused their stories onto common problems that happened all the time mostly among middle-class people. Naturalists wanted to rebell against the hierachy of their society and most of all they wanted to show the higher-class people what life was like in poorer classes. They presented them poverty, miserable children, unhappy marriages and adultery, the situation of illegitimate children, the exploitation of workers, alcoholism, violence, crime and much more. By opening the readers' eyes, naturalists wanted to evoke the conscience of wealthy people. Emile Zola (1840-1902) and Henrik Ibsen (1828-1906) can be regarded as one of the most important naturalists that have ever lived. Zola wrote down a theory, "Le roman emperimental" which said that people's fate was determined by their genes, their race and the social environment they grew up in. In his plays, Henrik Ibsen draws the audience's attention onto the "life-lie" in general. He wants his audience to understand that the truth is always better than wearing a mask for a life-time. His most famous books were "Ghosts", "A Doll's House" and the "Wild Duck". Ghosts is a typical naturalistic play. It shows the world as it was in the 19th century and teaches the audience that you cannot escape the truth. The plot is simple which makes it even more realistic. At the beginning of the play, Mrs. Alving, the widow of Captain Alving who was a well-known and respected man in the village, is planning to open a children's home dedicated to her husband. Mrs. Alving receives Pastor Manders, an old friend of hers, to discuss the bureaucratic details and the opening event itself. In the course of their conversation the Pastor accuses her of not having led a moral life due to the fact that she left her husband a short period after their marriage and even tried to seduce the Pastor. ...read more.

Shortly afterwards Osvald has his final attack and dies. Konstantin Stanislavski (1863-1938) was one of the most important theorists in theatre history. In 1906 he developed the "System" a theory that would later on help many actors to act convincingly. The System consists of 9 points: "action" (as an actor you have to know why your character is doing what he does, or what your purpose is when entering the stage), "If" (think about how you would react in a certain situation and then reflect this feeling onto your character), "the given circumstance" (an actor should create an environment before acting out a scene),"imagination" (imagine all different aspects of your character), "unit and objectives" (what is the character thinking, feeling? when would you end one scene and start another?), "super-objective and through-line action" (what is the character's goal? What is the theme of the entire play?), "emotion memory" (can you remember a situation in which you felt like your character? Were you in a similar situation?) and "tempo-rhythm in movement" (decide who are the quiet and slow characters! Who goes hurriedly through life?). At the beginning of Act 2 Mrs.Alving has just disovered that her son and Regina are starting to have a relationship. She is shocked because of her knowledge that Regina is actually Osvald's halfsister. Still she tries to comfort Pastor Manders because his view of the world as he has known it, has definitely fallen apart. The dinner must have taken place without much talking, it's unlikely that Pastor Manders and Mrs.Alving were very communicative. I'm sure that Mrs.Alving thought intensely about whether or not to tell Regina and Osvald that they were so closely related to each other. She thinks that again, she will not have the courage to tell Osvald the truth. She feels she has already gone too far. MRS.ALVING: If I had true courage I would take Osvald aside, look him in the eye, and say, "Listen, your father was a disgusting, degenerate human being." ...read more.

Take me." She will never forget his reaction. He drove her back into the paths of duty and righteousness, even though it was her husband who had come off the way from the beginning. But the Pastor only blamed her and never stopped telling her about her duty. Maybe this was his way to cope with that hopeless love. MANDERS: To expect happiness in this life is a form of arrogance, Mrs. Alving. It is the sign of a rebellious soul. What right do we have to happiness? We must do our duty, Mrs.Alving, and your duty was to stand by the man whom had chosen as your husband, the man to whom you were bound by the most sacred bonds... It was your humble duty to bear the cross which a higher power had chosen fo you. But instead, that rebellious soul of yours flings down that cross[...] I was only a humble instrument in the hand of a great purpose. You returned to your duty and to obedience: hasn't that proved a blessing for you ever since? The GHOSTS from her past will never leave Helene Alving. In his Drama Henrik Ibsen demonstrated the passive society of the 19th century or even nowadays and the hypcritical morals of the Church back then. The climax at the end prevents any illusions of bourgeois conventions. People can't cope with the truth because they would then realize that their whole life was a lie, which leads us on to the often discussed matter of the life-lie. If someone finally admits the truth to himself and his fellow citizens, he will have the freedom to actually change his life and not only complaining about it. All in all Ghosts is another play that shows us that the truth will always sooner or later come to the surface and that it's better to see things the way they are, than be disillusioned later on. Written by Verena Pichler ...read more.