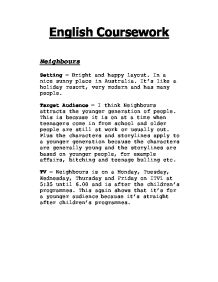 Neighbours - Setting = Bright and happy layout. In a nice sunny place in Australia. It's like a holiday resort, very modern and has many people.

English Coursework Neighbours Setting = Bright and happy layout. In a nice sunny place in Australia. It's like a holiday resort, very modern and has many people. Target Audience = I think Neighbours attracts the younger generation of people. This is because it is on at a time when teenagers come in from school and older people are still at work or usually out. Plus the characters and storylines apply to a younger generation because the characters are generally young and the storylines are based on younger people, for example affairs, b******g and teenage bulling etc. TV = Neighbours is on a Monday, Tuesday, Wednesday, Thursday and Friday on ITV1 at 5:35 until 6.00 and is after the children's programmes. This again shows that it's for a younger audience because it's straight after children's programmes. Storylines: * Lib, Susan and Steph have night out. ...read more.

Target Audience = Coronation Street as a general audience. It ranges from young teenagers up to the older men and women. This is unusual for soap but it is because the storylines and characters apply for all ages. TV = Coronation Street is on a Monday, Wednesday, and Friday on ITV1 at 7:30 until 8.00 and is on at mainstream time when all families are settling down after Tea and are watching telly. On Saturday and Sunday there is an omnibus of Coronation Street on ITV2. Coronation Street is quiet popular because it is on mainstream telly and this helps Coronations Street get good ratings. Storylines: * Dev and Steve become partners through Karen. The only reason Dev is involved is because Vic his brother and Steve's ex girlfriend left them �10,000 tax debt and business is going down. * Steve blasts Karen then realises she is right. ...read more.

Coronation Street is for all audience but is mainly watched by the older generation because it has more complicated storyline which have more detailed scripts. Neighbours is very easy to understand and is why it is attracted from the younger audience. I think the soaps, however, do have some similarities. They both have the same kind of setting, and have a meeting place like a pub and a work place like a caf� or hotel etc. They also have similar storylines but no in the same detail. But they do have great differences. They have different accents, they are based in different countries, and they both have different spreads of age groups in the cast. One of the main differences is the area. Neighbours is set in a very sunny, happy and joyful place were people are generally cheerful and pleasant. However, in Coronation Street it is different. It is set in a street which is very traditional and the people are happy but usually moody, unhappy or sad and there is always argument between the characters. ...read more.