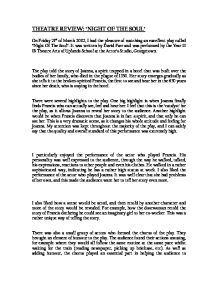 THEATRE REVIEW: 'NIGHT OF THE SOUL' On Friday 21st of March 2002, I had the pleasure of watching an excellent play called "Night Of The Soul". It was written by David Farr and was performed by the Year 13 IB Theatre Arts of Uplands School at the Actor's Studio, Georgetown. The play told the story of Joanna, a spirit trapped in a hotel that was built over the bodies of her family, who died in the plague of 1350. Her story emerges gradually as she tells it to the broken-spirited Francis, the first to see and hear her in the 650 years since her death, who is staying in the hotel. There were several highlights to the play. One big highlight is when Joanna finally finds Francis who can actually see, feel and hear her. I feel that this is the 'catalyst' for the play, as it allows Joanna to reveal her story to the audience. ...read more.

This was done by taking the audience back in time, before the hotel was built. Costumes were varied in the play. They ranged from formal business suits to tatty robes, and they were able to tell us a lot about the character, for example Francis who wore a very typical businessman's suit, indicating he is most probably a higher class citizen. The robes worn by the tribe were very realistic and gave them a very ancient feel. Sound and lighting also helped to create atmosphere. A lot of sounds were made use of, such as typical sounds at a train station, and even the simple "ding" of an elevator arriving at a floor. In my opinion, it would have been rather hard to tell that the actors were at a train station at that particular scene. The sound made it easier for the audience to believe it was a train station, and so the audience spent more time watching the performance rather than trying to figure out what the situation was. ...read more.

This was done well, and allowed the play to run smoothly. This is crucial in terms of pace, as the audience would not appreciate a play with long transitions. Music was also played during transitions to keep the audience entertained so they would not lose their attention. The stage had a fairly basic set-up. The audience was seated directly in front of the stage, with stepped seating levels so people at the back were able to see. The stage was also rather small, so as much of the stage possible had to be used. Despite the limitations, many different scenes could be successfully portrayed. I found the play to be rather abstract and realistic at the same time. It was rather abstract when it went back to 1350, but other than that it was very realistic. Everything was modern and familiar to the audience. Several things could be improved on, such as the clarity and loudness of voices. This particularly applied to when the tribe people with robes spoke. The robes would often muffle their voices and it made it difficult for the audience at the back to hear. SEAN FITZJOHN 11BP ...read more.