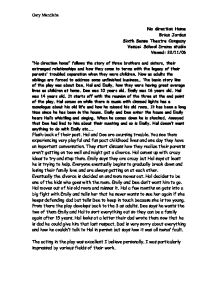 No direction Home Brian Jordan Sixth Sense Theatre Company Venue: School Drama studio Viewed: 22/11/06 "No direction home" follows the story of three brothers and sisters, their estranged relationships and how they come to terms with the legacy of their parents' troubled separation when they were children. Now as adults the siblings are forced to address some unfinished business... The basic story line of the play was about Dee, Hal and Emily, how they were having great average lives as children at home. Dee was 10 years old. Emily was 16 years old. Hal was 14 years old. It starts off with the reunion of the three at the end point of the play. Hal comes on while there is music with dimmed lights has a monologue about his old life and how he missed his old room. It has been a long time since he has been in the house. Emily and Dee enter the house and Emily hears Hal's whistling and singing. When he comes down he is shocked. Annoyed that Dee had lied to him about their meeting and so is Emily. Hal doesn't want anything to do with Emily etc... Flash-back of their past. Hal and Dee are coursing trouble. You see them experiencing very playful and fun pact childhood lives and one day they have an important conversation. They start discuss how they realize their parents aren't getting on too well and might get a divorce. Hal comes up with crazy ideas to try and stop them. ...read more.

The character showed the incredible emotion which comes across family being torn apart, from the tears to all the anger being felt. The tone of the voice was also used very well to sound it a most quite sincere fashion. The end scene where he was trying to talk to Hal but Hal wouldn't listen was acted particularly well and showed that character exactly as she should be depicted. As a child of 16 I felt that the actor could have put a little bit more in. She seemed to be at times playing two different characters. At times she seemed as if she was playing the character very well and showing the emotions, feelings and thoughts which a 16 year old would take. But at times she seemed to be showing emotions and voice tones a girl at a younger age than 16. The actor's role did not involve comedy in general so the comedy in the play was not shown through her. But one scene when she dresses up Hal as a girl was good comedy. Also sometimes as a 16 year old her over anger made some events 2quite funny and exaggerated. She did not completely inhabit the role of the character in a way that for the whole play she seemed to be playing none else but that character. As an adult she was brilliant and showed so much emotion, movement, gestures that the role was perfect but as a child she was not quite in the right frame of mind. ...read more.

All the sound was recorded. If I could see the musicians they would not be pat of the play and would conventionally be part of an orchestra pit. There were no special stage effects used which would wow or amaze someone besides lights and sounds. This was quite a low budget drama piece and cost �195 to perform. There was one thing which wasn't spectacular but impressed me was the presentation of all the rooms in a micro form of their original selves in boxes. When every character got into deep dialogue or something in the scene was based on them they opened the box to show a miniature version of the characters bedroom. I wouldn't like to think of the play as being an imaginary world because what they showed was very real and I would like to say they depicted a real life event very well. I come to the conclusion that overall the play was brilliant there were minor things which I didn't like but minor. I didn't like the way Emily was shown as a 16 year old. To me it seemed a bit out of character didn't match what was required. I really enjoyed the ending of how all the characters stood next to their rooms and started speaking synchronized and spun their rooms. I thought this was a great way of showing confusion. Below is the diagram of the basic stage setup of the play at the beginning. I have purposely left out the actors because they are not part of the stage-craft. Emily's Bedroom Back row audience Hal's Bedroom Front row audience Dee's Bedroom ?? ?? ?? ?? Gary Mandizha ...read more.