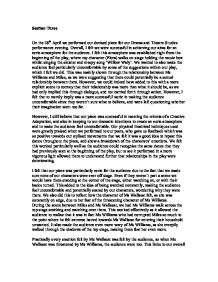 Notes on our devised piece. I felt that our piece was particularly eerie for the audience due to the fact that we made sure none of our characters were ever off stage. Even if they werent part a scene we would have them standing at the corner of t

Section Three On the 28th April we performed our devised piece for our Drama and Theatre Studies performance evening. Overall, I felt we were successful in achieving our aims for an eerie atmosphere for the audience. I felt this atmosphere was established right from the beginning of the play, where my character (Flora) walks on stage holding the music box whilst singing the sinister and creepy song 'Willow Waly'. We wanted to also make the audience feel particularly uncomfortable by some of the suggestions within our play, which I felt we did. This was mainly shown through the relationship between Ms Williams and Miles, as we were suggesting that there could potentially be a s****l relationship between them. However, we could indeed have added to this with a more explicit scene to convey that their relationship was more than what it should be, as we had only implied this through dialogue, and not carried forth through action. ...read more.

I felt that our piece was particularly eerie for the audience due to the fact that we made sure none of our characters were ever off stage. Even if they weren't part a scene we would have them standing at the corner of the stage, either watching on, or with their backs turned. This added to the idea of being watched constantly, making the audience feel uncomfortable and potentially scared by our characters, wondering why they were there. We also did this to reflect how the character of Ms Wallseat felt, as she was constantly on edge, due to her fear of the threatening character of Ms Williams. During the scene between Miles and Ms Wallseat, we had Ms Williams walk across the top stage smirking and watching over them. This worked effectively as it allowed the audience to realise that it was in fact Ms Williams who had corrupted Miles so much to the point where he felt extreme hatred towards Ms Wallseat for entering their household unwanted. ...read more.

Health and Safety When devising our play, we had to be particularly conscious of the health and safety precautions. Although we hardly used any props, we made sure that after each scene, the unnecessary ones were to be taken off before the next scene started. For example, a lantern had been left on stage in a rehearsal, and when I was rehearsing in front of an audience I tripped over the lantern. After that, we made sure that this lantern was taken off immediately after it had been used in order to ensure this didn't happen again. We also made thoroughly sure that there weren't any sticking out pins or nails on the stage, as it is a wooden stage which is fastened together with nails, in order to ensure that there was no risk that we would accidentally step on a loose nail. Words: 701 ...read more.