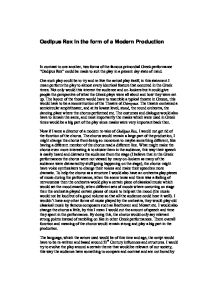 Oedipus Rex in the form of a Modern Production

Oedipus Rex in the form of a Modern Production In contrast to one another, two forms of the famous primordial Greek performance "Oedipus Rex" could be made to suit the play in a present day state of mind. One such play could be to try and re-live the actual play itself, in this statement I mean perform the play to almost every identical feature that occurred in the Greek times. Not only would this interest the audience and on-lookers but it could give people the perspective of what the Greek plays were all about and how they were set up. The layout of the theatre would have to resemble a typical theatre in Greece, this would have to be a reconstruction of the Theatre of Dionysus. The theatre contained a semicircular amphitheater, and at its lowest level, stood, the round orchestra, the dancing place where the chorus performed etc. The costumes and dialogue would also have to remain the same, and most importantly the masks which were used in Greek times would be a big part of the play since masks were very important back then. ...read more.

I wouldn't have any other forms of music played by the orchestra, they would play old classical music by famous composers such as Beethoven and Mozart etc. I would also change the chorus a little, by this I mean I would cut the amount of speech and time they spent in the performance. By doing this, the chorus would only say relevant strong points instead of rambling on like in other Greek performances. There overall function and meaning of the chorus would remain strong and play a big part in the production. The language, which the actors used would be of this time and age, the script would have to be re-written and based around 21st Century influences and structures. I would try to evolve the play around a certain theme that would be relevant of our society, this way the audience have something to compare and contrast and are not bored by old myths and stories. I would structure the conversation, dialogue, costumes etc around modern day so that the audience and on-lookers could pick up the message of the play easily, the message which Oedipus Rex presented was that, man is susceptible to anything and everything, this message would have to be present in the production and this is portrayed through the costumes, dialogue and conversation between characters. ...read more.

The use of lighting would be very large in the production, for different scenes different coloured lights would be used to signify different sorts of moods e.g. blue for sadness and depression, red for romance or anger, black for death, yellow for calmness and tranquility. Some important scenes where light colours would be relevant are for example when the truth about Oedipus's past is finally being revealed to him, when Oedipus finds out Jocasta has killed herself and stabs out his eyes, scenes where there is fighting or anger between characters etc. The costumes of the actors would not be old looking or anything, they would resemble modern day clothes so that the audience and on-lookers can understand the production and the message it shows easily. I would not have the actors wear masks, since it wouldn't be relevant to modern day performances and the audience are close enough to see the emotions and actions that the actors emit on stage. All these features would make the performance rather interesting, and help the audience receive the message from the play, though time and technology has changed and maybe the actual performance itself, the message is still present in our modern day and age. By Aiman Khammash ...read more.