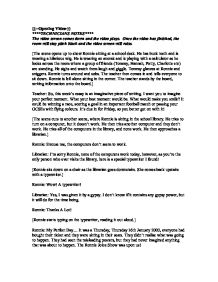 {{--Opening Video-}} ****TECHNICIANS NOTES**** The video screen comes down and the video plays. Once the video has finished, the room will stay pitch black and the video screen will raise. [The scene opens up to show Ronnie sitting at a school desk. He has buck teeth and is wearing a hilarious wig. He is wearing an anorak and is playing with a calculator as he looks across the room where a group of friends (Tommy, Hannah, Potty, Charlotte etc) are standing. He sighs and watch them laugh and giggle. Tommy glances at Ronnie and sniggers. Ronnie turns around and sobs. The teacher then comes in and tells everyone to sit down. Ronnie is left alone sitting in the corner. The teacher stands by the board, writing information onto the board.] Teacher: So, this week's essay is an imaginative piece of writing. I want you to imagine your perfect moment. What your best moment would be. What would make you smile? It could be winning a race, scoring a goal in an important football match or passing your GCSEs with flying colours. It's due in for Friday, so you better get on with it! [The scene cuts to another scene, where Ronnie is sitting in the school library. He tries to turn on a computer, but it doesn't work. He then tries another computer and they don't work. He tries all of the computers in the library, and none work. He then approaches a librarian.] Ronnie: Excuse me, the computers don't seem to work. Librarian: I'm sorry Ronnie, none of the computers work today, however, as you're the only person who ever visits the library, here is a special typewriter I found! [Ronnie sits down on a chair as the librarian goes downstairs. She comes back upstairs with a typewriter.] Ronnie: Wow! A typewriter! Librarian: Yes, I was given it by a gypsy. I don't know if it contains any gypsy power, but it will do for the time being. Ronnie: Thanks A Lot! ...read more.

Ronnie: They made me tidy my room! Tommy: Oh no Ronnie, surely not that. I mean, how many other kids have to clean their room, and I expect they made you do homework too? Ronnie: They did, it's so unfair! Tommy: Well, I'm sure it's a sign to indicate that they don't love you; I mean next they could make you wear braces or ground you. Don't kid yourself, it's not worth it. Ronnie: Also, I don't have any friends. I'm depressed and lonely. Tommy: Yes, I'm sure that's not normal in teenagers. Everyone else is happy, apart from you. Put the Prozak away, because you should be drinking rat poison! Ronnie: And I was embarrassed too, I spilt a drink at a party and then I dropped some food in a restaurant! Tommy: No-one has to go through that kind of embarrassment Ronnie, the message is clear what you have to do. Ronnie: I think I've flunked out of school, and I don't even know algebra! Tommy: I think we need to test you on some algebra Ronnie... Flunked out of school + don't know algebra = Time for... I bet you don't know the answer do you? Ronnie: Nope Tommy: It begins with's' and ends with 'uicide'. Ronnie: And to top it off, I've got the flu! Tommy: Uh oh, the flu? You realise there is no cure for that right? The only cure is painting the walls with your brains, go and see a technician, he'll lend you what you need. [Ronnie leaves the set as Tommy walks in front of the curtains, which are closed behind him. At this point, the tables and chairs are moved.] Ronnie: As always, we have the Kilroy Final Thought, and I didn't copy Jerry Springer, I promise! Now if you are like Ronnie and have horrible parents like him, then there is one thing you can do! ...read more.

'Ronnie can I stay in bed all day?' 'Yes you can Ronnie.' Both me, that's not me in bed with another bloke called Ronnie." {{--Fraz-}} [Fraz does her stuff.] {{--Football Interview-}} [Football commentary is heard and then the curtains open with Ronnie wearing sunglasses as a manager and Tommy as an interview.] Tommy: Mr. Wenger, what did you think of Patrick Viera's 17th sending off of the season? Wenger: I did not see the incident. Tommy: Surely you saw Patrick Viera thrust Danny Dichio's head into a McDonalds sign? Wenger: I do not think I saw it. Tommy: What about the moment when Thierry Henry took the ball around the whole Queens Park Rangers team, and scored with his nose? Wenger: I think Thierry is a great player, I saw the goal, I think it was great. Tommy: But then Clive scored for QPR, surely that was a let-down? Wenger: I did not see the incident. Tommy: Thank you for your time Arsene Wenger. {{--Kelly Osbourne-}} [Kelly Osbourne performs.] {{--Ronnie Talks-}} ****TECHNICIANS NOTES**** The mess caused will need to be cleared up during the DJ Sammy dance. Ronnie: Tonight, Alvin Stardust was going to come along, he's in Germany though, but we'd thought we'd pay a tribute to him. We're going to reinact his famous Road Safety campaign right here! Now, what I need is a member from the audience. [Picks a audience member, introduces them blah blah and then gives them an umbrella and dissapears backstage. He then returns with a bucket.] Ronnie: Alright, now you've got to shield your self from dangers of the road. You're in a car, and a fire truck is leaking. [Ronnie then soaks the person and laughs at them.] {{--DJ Sammy Dance-}} [Flik and Tommy do their dance.] {{--Freddie Mercury and Brian May Act-}} [Ronnie and Guy do their Queen tribute.] {{--Paradox-}} ****TECHNICIANS NOTES**** The band equipment will need to be set up during the curtain close. Also, there will need to be an extra sound guy during Peter Tomes absence for a secret reason. [Paradox finish 2 songs to end the show.] ...read more.