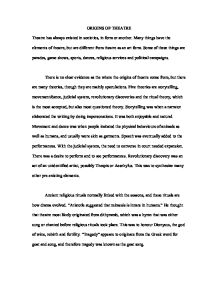 ORIGINS OF THEATRE Theatre has always existed in societies, in form or another. Many things have the elements of theatre, but are different from theatre as an art form. Some of these things are parades, game shows, sports, dances, religious services and political campaigns. There is no clear evidence as the where the origins of theatre come from, but there are many theories, though they are mainly speculations. Five theories are storytelling, movement/dance, judicial system, revolutionary discoveries and the ritual theory, which is the most accepted, but also most questioned theory. Storytelling was when a narrator elaborated the writing by doing impersonations. It was both enjoyable and natural. Movement and dance was when people imitated the physical behaviours of animals as well as humans, and usually wore skin as garments. ...read more.

They were made official, and as time went, the stories grew to explain the rituals. People soon started impersonating the gods, other beings, or the forces, and from there a "dramatic sense" was created. Throughout time, rituals were discarded or at least modified, however the myths still remained as oral traditions. A major step towards drama occurs when these are performed with simple drama. There are five reasons why rituals were performed. Firstly, it was a way of gaining knowledge. They were also used for educational purposes. Another reason was to show how they worshiped, and also to influence the audience. Of course they were also used to for entertainment purposes. Over time, aesthetics slowly overtook the religious and useful aims of the rituals. ...read more.

The elements of theatre began to increase, when rituals mains concerns were no longer religion, and man had gained confidence. Theatre is performed differently, and has different themes. In Western theatre, there are myths which show the relationship between the gods and humans. There is change, and progress, which create a certain reality. They include lots of conflict to show it as being the core of our living. In the Eastern theatre, myths show a certain togetherness between the gods and man. Contrary to change and progress in Western theatre, the Eastern theatre shows it to be illusions, and instead of much conflict, show tranquility and peace as being the truths of life. Western theatre originated from theatre in ancient Greece, and was quite possible influenced by eastern myths and rituals. However, Greeks developed these rituals into theatre, while the Eastern, which included Egypt, Byzantine, the Asians and the Indians, never went past rituals. ...read more.