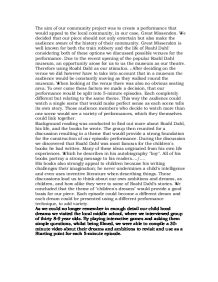 Our community project was to create a performance that would appeal to the local community, in our case, Great Missenden.

The aim of our community project was to create a performance that would appeal to the local community, in our case, Great Missenden. We decided that our piece should not only entertain but also make the audience aware of the history of their community. Great Missenden is well known for both the train robbery and the life of Roahl Dahl' considering both of these options we discussed possible venues for the performance. Due to the recent opening of the popular Roahl Dahl museum, an opportunity arose for us to us the museum as our theatre. Therefore using Roahl Dahl as our stimulus. v After deciding on the venue we did however have to take into account that in a museum the audience would be constantly moving as they walked round the museum. When looking at the venue there was also no obvious seating area. To over come these factors we made a decision, that our performance would be split into 5-minute episodes. Each completely different but relating to the same theme. This way the audience could watch a single scene that would make perfect sense as each scene tells its own story. Those audience members who decide to watch more than one scene would see a variety of performances, which they themselves could link together. Background reading was conducted to find out more about Roahl Dahl, his life, and the books he wrote. The group then reunited for a discussion resulting in a theme that would provide a strong foundation for the construction of our episodic performance. During the discussion we discovered that Roahl Dahl was most famous for the children's books he had written. Many of these ideas originated from his own life experiences. Which he describes in his autobiography "boy". All of his books portray a strong message to his readers..../.... His books also strongly appeal to children because his writing challenges their imagination; he never undermines a child's intelligence and even uses inventive literature when describing things. ...read more.

This is a necessity as our audience will be moving and they will only stand and watch when draw into the performance. In the pantomime we improvised around these stereotypical characters using the harlequin character as the narrator to interact will the audience the lovers to base the story around and the villain (evil stepmother) to provoke yet more audience response in the forms of booing and hissing. We also used the idea of stereotypical characters with the melodrama. Basing the scene on the idea of the three witches from Macbeth each with their own individual characters chanting round a caldron, for those audience member who were not familiar with Macbeth we incorporated some ideas for Roahl Dahl s story withes this idea also aided us to begin improvisation of the language used. We based the structure of the poem around the original Macbeth chant " Hubble bubble toil and trouble..." but instead used inventive language that appears in many Roahl Dahl books. Improvisation within the dance piece also began around a recognizable figure of a tree, together the performer used their bodies in relation to create a picture of a tree which was recognizable to the audience from here an initial stimulus was created to represent "tree' movements that we developed and repeated throughout the piece. We also drew ideas from the work of DV8 and lea Anderson and their use of post modernism. Post modern dance is a 20th centaury dance form. Using everyday day movement as a valid performance art and found new methods of dance composition thorough looking at different contracting stimuli and repacking them together, this can been seen within our piece because we have combined the idea of Roahl Dahl and taken ideas from children's dreams constructing a work of postmodernism. The idea of motif was also a good way of creating improvisation as throughout the performance it give the audience something to relate back to and is a good starting point for every section of the episodic structure. ...read more.

The five-minute breaks creating the episodic structure also proved effective, as Brecht would call a reflection time. Especially for the children as they used the empty performance space to try an imitate action that had just occurred on stage, proving that the children were not only entertained but wanted to have a go at it themselves. This shows it was most likely that our aim to imprint a lasting impression was successful. Although the adults within the audience did not show their appreciation in such a physical manner however their comments afterwards were very positive and they even took part in the audience vocalization during the pantomime. However I do think the venue its self may have been a slightly poor place to perform a street theatre piece. The entree fee to the museum meant that it was not members of the public that could walk past freely and glance but only those who wished to visit the museum. The performance space was also lacking in recourses we had planned to use lighting and more complex sounding however this was not catered for. The idea of using slides between each scene picturing the student whose dream became the stimulus for the scene also failed. These are considerations that need to be thought out more carefully before performing at an unusual venue again. Overall the performance was a success the structure and integration of arts forms was very successful throughout the performance, the melodrama combined acting with music, the stomp contained both music and dance and the tree dance became physical theater using all three art forms. All sections drew some inspiration from Roahl Dahl within the pantomime we repackaged short clips of his books into jokes and we created out own Roahl Dahl language within the melodrama. Each scene stayed faithful to the idea of children's dreams as each was created around the dreams of the young students we had interviewed. ...read more.