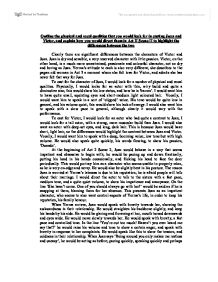 Outline the physical and vocal qualities that you would look for in casting Juan and Victor, and explain how you would direct them in Act II Scene II to highlight the differences between the two

Outline the physical and vocal qualities that you would look for in casting Juan and Victor, and explain how you would direct them in Act II Scene II to highlight the differences between the two Clearly there are significant differences between the characters of Victor and Juan. Juan is dry and sensible, a very reserved character with little passion. Victor, on the other hand, is a much more unrestrained, passionate and colourful character, not so dry and boring as Juan. Yerma's attitude to each is also very different; she describes to the pagan old woman in Act 3 a moment where she felt love for Victor, and admits she has never felt that way for Juan. To cast for the character of Juan, I would look for a number of physical and vocal qualities. Physically, I would looks for an actor with thin, wiry build and quite a diminutive size; this would show his low status, and how he is 'barren'. I would want him to have quite small, squinting eyes and short-medium light coloured hair. Vocally, I would want him to speak in a sort of 'clipped' voice. ...read more.

He would also be slightly bent in his posture. The reason Juan is worried at Yerma's lateness is due to his reputation; he is afraid people will talk about their marriage. I would direct the actor to talk to the sisters with a fast pace, medium tone, and a quite quiet volume, to show his impatience and annoyance. On the line 'She hasn't come. One of you should always go with her!' would be said as if he is snapping at them, blaming them for her absence. This presents Juan as an impatient character, who seems to also want control aspects of Yerma's life, in order to keep his reputation, his family honour. When Yerma arrives, Juan would speak with brevity towards her, showing the awkwardness in their relationship. He would straighten his backbone slightly, and keep his hands by his side. He would be glaring and frowning at her, mouth turned downwards and eyes wide. He would move slowly towards her. He would speak with brevity, a fast pace and controlled tone. In the line 'You're out too much! ...read more.

This would contrast with Juan's quick, fidgety gestures. In this scene, Victor is humbled slightly by the fact he is leaving. Nevertheless, on lines such as 'It's all the same. The sheep have the same wool', he would speak quite loudly, despite the dismissive nature of this line, and with a low tone. He would also shrug, putting his arms out far in an expansive, slow gesture. This would contrast with Juan's small, quick gestures. When Juan enters, I would juxtapose him with Victor, and have him bend his back slightly, to exaggerate and highlight the height difference between the two. Also, both of them being next to each other would provide the audience with a strong visual contrast. Victor would speak with more enthusiasm than Juan as well; in lines such as 'Your husband should see his fortune made!' he would speak with a loud volume, higher tone and on this line would move his hands from his shoulders downwards and outwards to his sides in a slow gesture. This would be seen next to Juan, who would be making slight, quick gestures, and speaking with a lower volume, higher pitch, and lower tone. This visual and vocal comparison would clearly show the audience the difference between the two characters. ...read more.