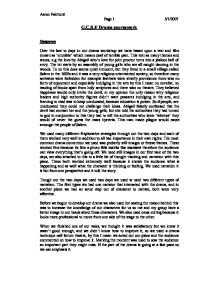 Over the last to days in our drama workshop we have based upon a text and film known as 'cruxible' which means deaf of terrible pain.

G.C.S.E Drama coursework Response Over the last to days in our drama workshop we have based upon a text and film known as 'cruxible' which means deaf of terrible pain. This text as many themes and issues, e.g the love by Abigail who's love for john proctor turns into a jealous ball of envy. The txt starts by an assembly of young girls who are all caught dancing in the woods. To us this does seems quiet innocent, but they lived in a small village called Salem in the 1600s and it was a very religious orientainted society, so therefore many activates were forbidden for example festivals were strictly providence there was no form of enjoyment and especially indulging in the arts by this I mean no novelist, no reading of books apart from holy scriptures and there was no theatre. They believed happiness would only invite the devil, in my opinion the only reason why religious leaders and high authority figures didn't want peasants indulging in the arts, and learning to read was to keep uneducated, because education is power. ...read more.

Before we begun to develop our drama we also used hot seating the reason behind this was to increase the knowledge of our characters for us so me and my group have a better image in our heads about these characters. We also used cross cutting because it looks more professional to move from one side of the stage to the other. When we finished one of our tasks, we thought it was satisfactory but we knew it wasn't good enough, and we didn't know how to improve it, so we used a drama technique call forum theatre, by this I mean we acted out our piece and the audience commented on how to improve it. Marking the moment was used to sow the audience an important part they might miss. If the part of the drama is going at a fast pace so we can emphasis it. Task 2 This script is based on one of our final tasks, which is non naturalistic. ...read more.

Abigail: No john No! Freeze Ghosts: Take a final look Abigail (at Johns grave) Ghosts: Look! Look!..Look! Abigail: (kneels at grave) I'm so sorry The End Through out the play we thought about many things to improve our drama. We included sound effects and music. The sound affect that worked the best for me was the chiming noise, which we used when the ghosts appeared; this was created by simply rattling some keys. We played the same music through out the whole of the play this had a very positive affect it was at a pace that was just right, and the music had a really peculiar and mystic feeling to it. Lightening was used to show peoples mood and the atmosphere e.g. red for anger or green for envy. When we changed scenes the lights would go down this looked smart and also the scenes looked clean cut plus space and levels were used below are examples of how we moved from scene to scene and from one side of the stage to the other. Aaron Fairhurst Page 1 5/1/2007 ...read more.