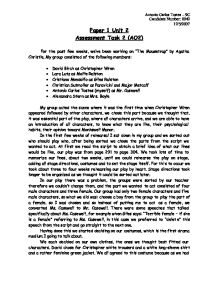 Paper 1 Unit 2 Assessment Task 2 (AO2) For the past few weeks, we've been working on "The Mousetrap" by Agatha Christie. My group consisted of the following members: * David Birch as Christopher Wren * Lara Lutz as Mollie Ralston * Cristiano Mondolfo as Giles Ralston * Christian Sutmoller as Paravicini and Major Metcalf * Antonio Carlos Tostes (myself) as Mr. Casewell * Alexandra Stern as Mrs. Boyle My group acted the scene where it was the first time when Christopher Wren appeared followed by other characters, we chose this part because we thought that, it was essential part of the play, where all characters arrive, and we are able to have an introduction of all characters, to know what they are like, their psychological habits, their opinion toward Monkswell Manor. In the first few weeks of rehearsal I sat down in my group and we sorted out who should play who, after being sorted we chose the parts from the script we wanted to act. ...read more.

Lara chose for Mollie a black dress and a fancy brown jacket, we also agreed with this costume, but after having done the play I began to think that Mollie's costume should be more domestic material, clothes people wear at home, normally when they are alone, but on the other hand, we also thought that by having guests in the house Mollie would want to look better, so the guests would have a better impression of her and the house itself. Cristiano chose for Giles a long-sleeve white shirt, and beige trousers from a blazer, we all agreed with this costume because, these are casual outfits for a man at that time (back in the 1920's), and for the same reason as Mollie he wanted to look nice for the guests in the house Christian played two characters: Paravicini and Major Metcalf. For Paravicini he chose a normal outfit also, a long-sleeve white shirt and a jean trousers, Paravicini was an Italian man with a strong personality, and rather casual too. ...read more.

Different to Chris, he was more serious towards the other characters with whom he was interacting. The climax of our scene was the moment where Paravicini enters the guesthouse when Mollie and Giles were alone; causing a surprising effect. When Paravicini starts to develop his monologue he causes tension and a lot of mystery to the scene. Characterization is an important issue to look when performing a play. It is when you get to know who is your character, how does he think, how does he act in certain situation. In my case, while studying Ms. Caswell, I could see she has a rather manlike manner, even though she very formal and polite. Overall I thought it was good to do this workshop so to enhance our knowledge on "The Mousetrap". It is a very good play to act as it has lots of contrasting characters, where each one has its own way of thinking, none of them a similar. But I think we could still improve our performance by adding more songs, to cause more impact, and also add lights to show better the emotions of the characters at a particular scene. ?? ?? ?? ?? Antonio Carlos Tostes - 9C Candidate Number: 0042 17/5/2007 ...read more.