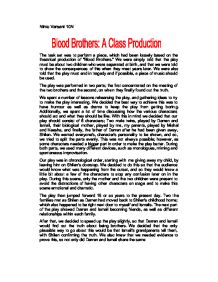 The task set was to perform a piece, which had been loosely based on the theatrical production of "Blood Brothers." We were simply told that the play must be about two children who were separated at birth, and that we were told to show the consequences of this when they meet years later. We were also told that the play must end in tragedy and if possible, a piece of music should be used. The play was performed in two parts; the first concentrated on the meeting of the two brothers and the second, on when they finally found out the truth. We spent a number of lessons rehearsing the play, and gathering ideas to try to make the play interesting. We decided the best way to achieve this was to have humour as well as drama to keep the play from getting boring. Additionally, we spent a lot of time discussing how the various characters should act and what they should be like. With this in mind we decided that our play should consist of 6 characters; Two male twins, played by Darren and Ismail, their biological mother, played by me, my parents, played by Mishal and Keesha, and finally, the father of Darren after he had been given away, Shilen. ...read more.

At this point, Darren, Ismail, Keesha and Mishal were at Shilen's house. After finding out this news, we felt that the best response would be for Darren and Ismail to get angry and accuse Mishal and Keesha of lying. In order to try to create drama, Mishal and Keesha left, and it was left for Shilen to tell the truth. Up until this point, none of the characters on stage knew that I was Darren's mother and it was only after Shilen had explained the truth that he realised that I was the mother. This is where the first part ended. We wanted the second part to be as dramatic as possible, as this was the main part of the play. The play continued with Darren, Ismail and Shilen demanding the truth. After repeatedly avoiding the issue, my character was forced to tell the truth. In order to create drama, Shilen decided that if Ismail wanted to live with him, instead of me, he was more than welcome to. The exit of these characters was provided to enable the build up to the tragedy that was to take place. ...read more.

Another play I really enjoyed was the one with Bhavna, Arbab, Mitul, Rakhi, Poonam and Sejal. I enjoyed this play as it was well performed and the acting was very realistic. The play contained humorous parts as well as serious and emotional parts. I thought they play was organised, and the use of flashback made the pay easier to understand. I thought that when Arbab killed himself; it was done very professionally, although he had no props. I also thought Poonam giving away her child was done professionally, as she seemed to react in the same way you would expect a real mother to do so. Each character in their play was different and made the play seem interesting. My favourite part was at the end, when Bhavna discovered Arbab, as it was a very sad scene, and the use of music made the play seem very real. All the plays performed were all good in their ways and they all reiterated the same message. No one can be trusted, not even your own family, and if a lie is discovered it can lead to devastating consequences. Nimu Varsani 10N 3 ...read more.