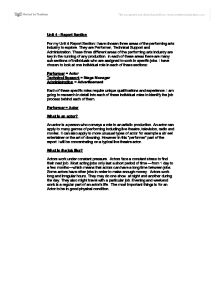 Unit 4 - Report Section For my Unit 4 Report Section I have chosen three areas of the performing arts industry to explore. They are Performer, Technical Support and Administration. These three different areas of the performing arts industry are key in the running of any production. In each of these areas there are many sub sections of individuals who are assigned to work in specific jobs. I have chosen to look at one individual role in each of these sections: Performer = Actor Technical Support = Stage Manager Administration = Advertisement Each of these specific roles require unique qualifications and experience. I am going to research in detail into each of these individual roles to identify the job process behind each of them. Performer = Actor What is an actor? An actor is a person who conveys a role in an artistic production. An actor can apply to many genres of performing including live theatre, television, radio and movies. It can also apply to more unusual types of actor for example a street entertainer or the art of clowning. However in this "performer" part of the report I will be concentrating on a typical live theatre actor. What is the job like? Actors work under constant pressure. Actors face a constant stress to find their next job. Most acting jobs only last a short period of time-from 1 day to a few months-which means that actors can have a long time between jobs. Some actors have other jobs in order to make enough money. Actors work long and irregular hours. They may do one show at night and another during the day. They also might travel with a particular job. Evening and weekend work is a regular part of an actor's life. The most important things is for an Actor to be in good physical condition. What skills are required to become an actor? ...read more.

However if an individual feels that they want to go to do a university course in acting then they can still get into the industry either through auditions or they can go on to do a post graduate course at one of the top drama schools in the U.K, which is a very popular choice. 2. Some individuals after finishing 6th form or college decide to go straight into the business after their A Levels. This is a harder way of making it into the profession because employers are constantly looking for qualifications not just experience. However through auditioning for productions you become recognised and may end up being talent spotted. When you choose to go straight into the profession you will mainly be looking for any available jobs to heighten your experience. You can use many methods to find jobs, either through papers like "The Stage" or through internet sights like "The Stage online", "Star Search", "Cast Net" or "P.C.R". You would right to any jobs available of which you fit into the criteria. You would write a formal letter to the director/production company stating why you would be suitable for the job, any qualifications or experience that is appropriate to the advert and any extra information that you think would make you more employable. You could also when looking for a job use a method called "Cold Calling" which is where you write to a company asking if there are any jobs available at the moment. Also if you decided to go straight into the profession you would rely on "networking" to enhance your career. Networking is where you share details with other people as an informal way of getting known. If someone has your details already they may consider you for a part or inform you of auditions. The performing arts business is all about 'who you know' the more contacts you have the more likely you are to get a job. ...read more.

Actors are unusually in and out of part time jobs while working on different projects. An actor needs to keep a part time job because to chance of work is so slim. The part time job also has to be flexible to fit in with audition times which are usually during the day and last a long time. It is also important that the employers know that they may have to drop out of the job in short notice due to an offer of a part. Typical jobs that actors may do are front of house which works on a rota system so you can work in the evening after auditions and are very flexible. Similarly they make work as box office staff or in the marketing side of performing. Actors may find themselves working all over the UK and touring abroad. Auditions are usually held in London or other capital cities and actors will often be required to attend them at very short notice. The life of an actor is tough and requires hard work and dedication. You also have to physically and mentally able to take the strain of this unpredictable lifestyle. The lifestyle implications are considerable. Time spent away from home is an inevitable part of the job. Disruption to home and social life is unavoidable. Many actors leave the profession because of difficulties finding work. When you want to get into the profession you always need to have a back up plan, not many performers make it and you have to keep that in mind at all times. There are many routes an actor can take into other related areas including teaching, theatre management, directing, drama therapy or script writing. Some may also move on to other types of theatre such as Theatre in Education companies which tour school and use drama to educate children. They may also do work for museums or heritage organisations to play a historical role. "An Actor can fall just as fast as they fly" Judy Dench "Our business is very tough - we need strength behind us." Gillian Lynne ...read more.