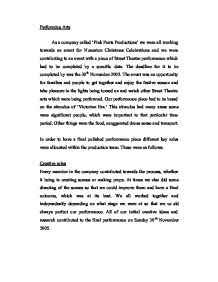 Performing Arts As a company called 'Pink Pants Productions' we were all working towards an event for Nuneaton Christmas Celebrations and we were contributing to an event with a piece of Street Theatre performance which had to be completed by a specific date. The deadline for it to be completed by was the 30th November 2005. The event was an opportunity for families and people to get together and enjoy the festive season and take pleasure in the lights being turned on and watch other Street Theatre acts which were being performed. Our performance piece had to be based on the stimulus of 'Victorian Era.' This stimulus had many areas some were significant people, which were important to that particular time period. Other things were the food, exaggerated dress sense and transport. In order to have a final polished performance piece different key roles were allocated within the production team. These were as follows: Creative roles Every member in the company contributed towards the process, whether it being in creating scenes or making props. At times we also did some directing of the scenes so that we could improve them and have a final outcome, which was at its best. We all worked together and independently depending on what stage we were at so that we could always perfect our performance. ...read more.

> On the performance night we were all organised and all of our team was there on time that meant there was enough time to get ready physically and mentally. Creative Process: Weaknesses and Areas of Improvement I will evaluate the weaknesses and areas of improvement in the creative process, which may have slowed us down: > Too much talking, being late, phones going offal slowed down the process down. So for future reference all this will be taken into account and time will be used appropriately and everyone must be more disciplined. > In some of the lessons we were too energised, which meant we didn't stay on task and didn't get on with what we were supposed to do. If we did get it all done then the process could have been speeded up and we might have had more time at the end to perfect the performance. To overcome this problem calmer warm-ups are needed. Maybe if people are motivated physically at the start then mental exercises should be done for example, mind games which get us thinking this would helped with the creative process as more ideas would erupt. > However, at times the group wasn't motivated and therefore felt there was no need to be on task. ...read more.

I will now evaluate the strengths of the production team roles: > We all picked our production team name fairly as we came together and did a vote on the best title and company name. This was all good teamwork as we were making decisions fairly together. > The publicity group got all the posters out on time and we had an audience who were entertained by our performance. This had a major contribution to a successful performance because if the posters were not completed on time then we wouldn't of had an audience to watch us and we wouldn't have completed our task. > Many deadlines were set and they were all completed however there was the odd one or two which were postponed to a later date we all felt they could have longer to be finished by. Deadlines contributed to the overall event as it brought links together and helped us get everything done on time. > In some of the lessons we did warm ups these were both physical and mental they helped to energise members and motivate them. The Health and Safety group came up with particular warm-ups these were involving singing catchy songs and using your body to show and express the words. This helped us to get into the right frame of mind so we could think and exaggerate the skills used in the warm-ups into our actual performance piece. ?? ?? ?? ?? ...read more.