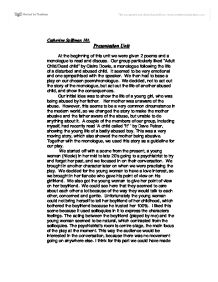 Catherine Spillman 10L Presentation Unit At the beginning of this unit we were given 2 poems and a monologue to read and discuss. Our group particularly liked "Adult Child/Dead child" by Claire Dowie, a monologue following the life of a disturbed and abused child. It seemed to be very emotional and one sympathised with the speaker. We then had to base a play on our chosen poem/monologue. We decided, not to act out the story of the monologue, but act out the life of another abused child, and show the consequences. Our initial idea was to show the life of a young girl, who was being abused by her father. Her mother was unaware of the abuse. However, this seems to be a very common circumstance in the modern world, so we changed the story to make the mother abusive and the father aware of the abuse, but unable to do anything about it. A couple of the members of our group, including myself, had recently read `A child called "it" ' by Dave Pelzer, showing the young life of a badly abused boy. This was a very moving story, which also showed the mother being abusive. Together with the monologue, we used this story as a guideline for our play. We started off with a scene from the present, a young woman (Nicole) in her mid to late 20's going to a psychiatrist to try and forget her past, and we focused in on their conversation. ...read more.

The psychiatrist and Nicole then discuss that that wasn't what her life was like, and I believe that this got the audience interested in what life was really like. We added another freeze-frame and again focused in on downstage right. This time it gave off dark imagery with the young Nicole (played by Sinead) hiding away, crouched in a ball, from her mother, and her mother (played by Hannah) looking less than sober. Also the father (played by Ashley) seemed to be glaring at the mother. The scene immediately started with shouting, which I thought was good because the previous family scene had started with silence and then soft conversation and this was the first contrast in the scene. It was basically an argument between the mother and father about Christmas dinner being ruined. We could see the mother dominating both Nicole and the father in this scene because she was shouting at them both. I particularly like the image with Hannah standing over Sinead and shouting at her because that seemed to show that Hannah thought she was above the girl and the girl faced away from her because she was too scared to fight back. We got the impression the young girl was so intimidated by her mother's ongoing verbal abuse and threat of physical violence because she said hardly anything, and it seemed was too afraid to even look at her, as there wasn't a lot of eye contact between the mother and the daughter. ...read more.

This next point I thought was very well acted because it was so emotional. It ended with the first loving conversation between a parent and the daughter in the play, where the father promised to come back to the girl to take her away. After a brief scene at the psychiatrist's room again, we come to the next scene. Nicole is in her mid teens and returns home from school in a happy mood. This was good because it was ironic, as in the next two minutes she would be breaking down in tears. When she entered a room the audience saw her mother laying on the floor still. We thought this was good because the audience would've thought that she had possibly fallen asleep from the alcohol, along with her daughter's thoughts. However, we decided that the daughter should show some emotion towards her mother, and we changed the idea from her mother being asleep, to her mother being dead. Even though her mother was horrible to her all her life, Nicole(young and older) seemed to be absolutely distraught at her mother's death. At this point we thought it would be good for the young Nicole to start crying first, and then to have the older Nicole join in with the crying. All three scenes seem to come alive at this point because the boyfriend barges into the room, whereupon the young Nicole stops crying. This is at the point when the boyfriend leaves Nicole, putting on more upset for her. ...read more.