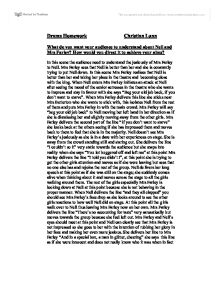 Playhouse Creatures - Act 1, Scene 9 -What do you want your audience to understand about Nell and Mrs Farley? How would you direct it to achieve your aims?

Drama Homework Christian Lunn What do you want your audience to understand about Nell and Mrs Farley? How would you direct it to achieve your aims? In this scene the audience need to understand the jealously of Mrs Farley to Nell. Mrs Farley sees that Nell is better than her and she is constantly trying to put Nell down. In this scene Mrs Farley realises that Nell is better than her and taking her place in the theatre and becoming close with the king. When Nell enters Mrs Farley initiates an attack at Nell after seeing the mood of the senior actresses in the theatre who she wants to impress and stay in favour with she says "Beg your old job back, if you don't want to starve". When Mrs Farley delivers this line she sticks near Mrs Betterton who she wants to stick with, this isolates Nell from the rest of them and puts Mrs Farley in with the main crowd. Mrs Farley will say "beg your old job back" to Nell moving her left hand in her direction as if she is dismissing her and slightly moving away from the other girls. ...read more.

The rest of the girls especially Mrs Farley is looking down at Nell at this point because she is not behaving in the proper manner. When Nell delivers the line "and they all clapped" you should see Mrs Farley's face drop as she looks around to see the other girls reactions to how well Nell did on stage. At this point all the girls walk over to Nell thus leaving Mrs Farley now on her own. Mrs Farley delivers the line "There's no accounting for taste" very sarcastically but moves towards the group because she feel left out. Mrs Farley and Nell's eyes should meet at this point and Nell can clearly see that Mrs Farley is not impressed so she goes to her with the intention of rubbing her glory in her face and making her even more jealous. She delivers her line to Mrs Farley "And in a special box, a man in glitter, cheering" she says this line as if she were innocent and does not really know who it was when in fact it is a strategy to rub her face in it. ...read more.

Throughout this text we should see the tension and sparks between Nell and Mrs Farley who should constantly look at each other. Both characters are trying to be one of the favourites and always trying to impress whether it be copying a mood or helping someone out and showing interest it is all to become popular and a motive of both characters. This scene is set in the tiring room which I picture would be quite plain with tables and mirrors and costumes all around the place. If it was a big cast I would have many other people bustling about on stage, carrying costumes in and out and helping to undress each other. I would like to create an image of the slums. The theatres were not well off and everyone was crammed into one room. The theatres would be grand and big to fit as many people in as possible but I want to create an image that behind is cramped and bustling. This affects the relationship between Nell and Mrs Farley because it is not as easy for them to stay away from each other; this forces them to be civil and would increase the tension between them. ...read more.