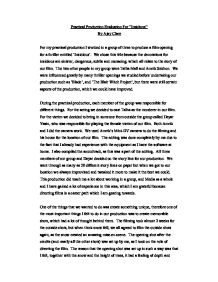 Practical Production Evaluation For "Insidious" By Ajay Clare For my practical production I worked in a group of three to produce a film opening for a thriller entitled 'Insidious'. We chose this title because the denotations for insidious are sinister, dangerous, subtle and menacing; which all relate to the story of our film. The two other people in my group were Talha Mall and Amrik Sekhon. We were influenced greatly by many thriller openings we studied before undertaking our production such as 'Blade', and 'The Blair Witch Project', but there were still certain aspects of the production, which we could have improved. During the practical production, each member of the group was responsible for different things. For the acting we decided to cast Talha as the murderer in our film. For the victim we decided to bring in someone from outside the group called Deyar Yasin, who was responsible for playing the female victim of our film. Both Amrik and I did the camera work. ...read more.

The trees on both sides looked as if they were looming towards the girl in the shot, providing an eerie feeling to the shot. One of the shots, which I am most proud of for us creating, is the shot that comes in at 2 minutes and 44 seconds of the film, where the girl points the gun towards the camera, almost 'involving' the audience in the film. I suggested that we use this particular shot because I had seen similar shots in other films which stuck in my mind, and a memorable shot such as this would stay in the audiences mind, long after seeing the film. I feel that this shot was the best shot we created in our production. We felt it was important to identify the studio to which the film was associated, as many other mainstream Hollywood films did. Therefore during the editing process I decided to use the New Line Cinema logo, which I took off the DVD 'Blade'. ...read more.

However we decided to go against one stereotypical idea of the victim in Hollywood films, which is a white blonde, as we thought that it would be better to cast an Asian female to reach out to a wider audience because we were representing a broader range of people in our film. One of the things which we could have improved about our production is the fact that in the room where the female is murdered, there was not enough light for a clear shot. We used low-key lighting to create a spooky feeling to the shots but I would have liked a bit more light in the room for a clearer shot of the victim. To improve this we could have positioned the lights at a better angle in the room. One of the other things, which I would have liked to have been improved, is the point of view shot outside, which I believed cut away to quickly. Overall I think the strengths of our production outweigh the weaknesses and we were able to make a well-planed, successful production. ...read more.