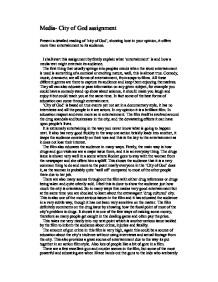 Present a detailed reading of 'city of God', showing how in your opinion, it offers more than entertainment to its audience.

Media- City of God assignment Present a detailed reading of 'city of God', showing how in your opinion, it offers more than entertainment to its audience. I shall start this assignment by firstly explain what 'entertainment' is and how a media text might entertain its audience. The first thing that usually springs into peoples minds when the word entertainment is used is something of a comical or exciting nature, well, this is almost true. Comedy, music, drama etc. are all forms of entertainment, from soaps to films. All these different genres are there to capture its audience and keep them enjoying themselves. They all can also educate or pass information on any given subject, for example you could have a comedy stand-up show about science, it should make you laugh and enjoy it but could teach you at the same time. In fact some of the best forms of education can come through entertainment. 'City of God' is based on true events yet not set in a documentary style, it has no interviews and all the people in it are actors. ...read more.

This shows the audience that it is a very common thing to do and more to the point nearly everyone in the 'City of God' does it, as the woman is probably quite 'well off' compared to most of the other people there due to her job. There are also many scenes throughout the film with either drug references or drugs being taken and quite oftenly sold. I feel this is done to show the audience just how much the city is orientated. So in many ways this makes very good entertainment but at the same time you are shocked to learn about the extravagant 'drug cultured' city. This is also one of the most serious issues in the film and it has educated the audience in a very subtle way, though it has not been very sensitive on the matter. The film definitely comments on the drug issue by showing how the focal point of most of the city's problem is drugs. ...read more.

To sum up, the last piece of educational status in the film is a major one yet not so obvious. It is the fact that there are only two ways to get a decent life and some money in the city. Either get a real job for example do what Rocket did, became a photographer or become involved in drugs which is fairly ironic getting a good life by becoming involved in a bad thing which unfortunately most people do and end up being killed or losing someone close to them. Out of the original characters nearly all were killed and only one ended up with a decent and stable life. This makes you think, out of the children we saw at the end of the film which of them will even make it to their 20th birthday and who if any will be sensible and get a good job. It just goes to show that the education in the film is strong, a documentary is not needed, the film is more effective as well as being entertaining. The audience were educated but may not have even realized it. ...read more.