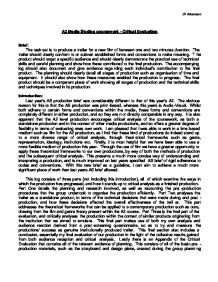 A2 Media Studies coursework - Critical Evaluation Brief: The task set is to produce a trailer for a new film of between one and two minutes duration. The trailer should clearly conform to or subvert established forms and conventions to make meaning. The product should target a specific audience and should clearly demonstrate the practical use of technical skills and careful planning and show how these contributed to the final production. The accompanying log should also document and give evidence regarding each individual's contribution to the final product. The planning should clearly detail all stages of production such as organisation of time and equipment. It should also show how these measures enabled the production to progress. The final product should be a competent piece of work showing all stages of production and the technical skills and techniques involved in its production. Introduction: Last year's AS production brief was considerably different to that of this year's A2. The obvious reason for this is that the AS production was print-based, whereas this years is Audio-Visual. Whilst both adhere to certain forms and conventions within the media, these forms and conventions are completely different in either production, and so they are not directly comparable in any way. It is also apparent that the A2 level production encourages critical analysis of the coursework, as both a standalone production and in the context of other media productions, and so offers a greater degree of flexibility in terms of evaluating ones own work. I am pleased that I was able to work in a time based medium such as film for the A2 production, as I find that these kind of productions do indeed stand up to a more diverse range of critical analysis, through theoretical frameworks such as genre, representation, ideology, institutions etc. Finally, it is most helpful that we have been able to use a more flexible medium of production this year. ...read more.

The reason for this is that the editing process gives the producer the freedom to introduce characters (shot with voiceover), regulate the pace (faster and faster cuts) and manipulate the entire impact of the one piece of work in post-production. To take advantage of this we dedicated more than half of our production schedule to this intricate process, more than double the time allotted for shooting. We carefully studied the way in which the characters are introduced, the pace is controlled, the music/sound effects are constructed and, most importantly, how the climax at the end is achieved. On this information we began to edit our footage with many jumps between shots and quick, loud sound effects to emphasise the action. Seven was again the benchmark for the production process, with 8mm playing a less significant role in production. The best way to begin an analysis of one's own production is to examine it objectively and compare it to other similar productions of a professional nature. In this case the best examples are indeed those that were originally chosen for our test screening; Seven, The Hole, Sleepers and 8mm. The production can then be analysed from a number of different theoretical perspectives, namely; which genre it can be classified as, its target audience, the representation of the film's characters, the way in which the production satisfies the expectations of a sophisticated and genre-cognitive audience, the ideology that the film conforms to and the institutions involved in the production of the film. If I again take Seven, the benchmark film for our trailer (and indeed the genre), and compare it to Snuff, I can determine whether or not our production has portrayed the above factors in a similar way, and so gauge its success. I will also draw upon information derived from questionnaires completed by media students after a screening of the final production. This will help me determine exactly how successful the trailer has been, in terms of both popular reception and critical analysis, and ...read more.

Conclusion: Snuff has, by way of both audience reaction and critical analysis, seemingly achieved the criteria laid out in the brief very effectively. The running time of 1'. 48" proved to be an ideal length, giving away just enough to tantalise the audience, whilst still remaining fairly ambiguous so as to encourage an audience in any way receptive to this kind of genre (e.g. males 18-25) to come and see the film. We realised that it was very important that we had a clear target audience in mind throughout production, if we were to successfully emulate a Hollywood studio style of production. We knew that, as much as we would like to, we could not simply rely on a good-looking but empty trailer. Instead we created a trailer that, although not strictly adhering to all of the codes and conventions of contemporary Hollywood cinema, followed more than enough of them to create a structured and effective piece of work. I am very pleased with the final production, but the production was only a success because of the careful planning that was involved in the early stages, a vast improvement on last years AS production. I found it particularly enjoyable to be involved as part of a group. Although there were various degrees of input from each individual member, I felt that on the whole we planned efficiently and effectively, and that equal opportunities were available to everyone. I also found that, although not intentional, we all fell into our own roles throughout production and everyone got the chance to contribute to the production as they saw fit. Finally, I feel that the trailer has benefited considerably from the vast amount of theoretical study throughout the A2 course, in particular the genre theory module. It is because of this in depth analysis of genre that we were able to stay on course throughout the production, and produce an effective and professional feeling trailer that we feel may have added just a little bit extra to the Horror-Crime-Thriller genre. ?? ?? ?? ?? JP Adamson ...read more.