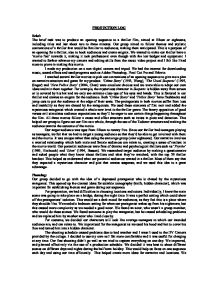 Production Log - Thriller Project The brief task was to produce an opening sequence to a thriller film, aimed at fifteen or eighteens, including titles and last about two to three minutes.

PRODUCTION LOG Brief: The brief task was to produce an opening sequence to a thriller film, aimed at fifteen or eighteens, including titles and last about two to three minutes. Our group aimed to follow themes and stylistic conventions of a thriller that would be familiar to audiences, making them anticipated. This is a purpose of an opening for a thriller, also to hook audiences and create enigma .We wanted to make our thriller have a 'movie feel' towards it, making it look professional even though with the low budget and equipment. I wanted to further advance my camera and editing skills from the music video project and I felt like I had more to prove in making this movie. I made my production on a non-digital camera and tripod. We had the internet for downloading music, sound effects and used programs such as Adobe Photoshop, Final Cut Pro and IMovie. I watched several thriller movies to pick out conventions of an opening sequence to give me a plan on narrative structure and genre for my product. 'Crime Story' (1993, Wong), 'The Usual Suspects' (1995, Singer) and 'New Police Story' (2004, Chan) were excellent choices and we were able to adapt our own ideas and mix them together. ...read more.

This allowed us to improve on our re-shoots as we could add attention to detail. Construction: During the filming, our group stuck to most of our plan, but several modifications were applied in order to make the thriller look professional. The scenes on the bridge were improved, for example, when our protagonist roams around. Our initial ideas were to cut closer to him as he wanders, looks across the bridge and sits down on the floor. The end product shows all three actions in one shot; we placed a tripod in one position and with the use of fade effects, it created space in between time and gave a good flow of length. There were difficulties in using the tripod as it was too rigid to be in motion. They were constructive for steady shots, but most scenes needed movement, especially for following characters. Most shots, therefore, were handheld, and we made sure the outcome was presentable to our audiences and not too shaky. Since we had difficult shots to practice at different times, it was complex in borrowing the DV camera as other groups needed it. Also, we knew from the music video experience, that we found it tricky to use and so we decided to use my camera, which lacked quality, but still carried out perfect sequences. ...read more.

I particularly liked the recording effect that was displayed, as it began as a mistake because we left the timer/display on, but our audience said that it worked well as it looked like someone was stalking him. I favored the editing as everything I had pictured in my mind came on to the screen. The slow build up to the bridge was done well; I used a selective amount of effects that was appropriate to the task and audiences were pleased as it gave it a movie feel. The costume was at the back of my mind and so I was disappointed when audiences figured this out. It almost lost the touch of a thriller but we were fortunate enough to concentrate on everything else which made it perfect. The ending of the sequence was rushed due to lack of time. Everything else was taken great care of in terms of editing, but for that ending we had to improvise with the hurried footage captured. Our project follows the conventions of a thriller and made audiences glued to their seats as they watched. I was most pleased that there were minor developments needed from the audience feedback, and so we felt that we took everything into great consideration into making a thriller opening. WORD COUNT: 2180 ?? ?? ?? ?? ...read more.