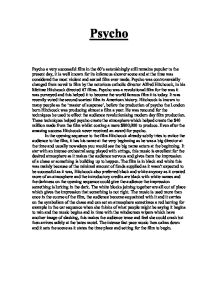 Psycho a very successful film in the 60's astonishingly still remains popular to the present day, it is well known for its infamous shower scene and at the time was considered the most violent and sexual film ever made.

Psycho Psycho a very successful film in the 60's astonishingly still remains popular to the present day, it is well known for its infamous shower scene and at the time was considered the most violent and sexual film ever made. Psycho was controversially changed from novel to film by the notorious catholic director Alfred Hitchcock, in his lifetime Hitchcock directed 67 films. Psycho was a revolutional film for the was it was purveyed and this helped it to become the world famous film it is today. It was recently voted the second scariest film in American history. Hitchcock is known to many people as the 'master of suspense', before the production of psycho the London born Hitchcock was producing almost a film a year. He was renound for the techniques he used to effect the audience revolutionising modern day film production. These techniques helped psycho create the atmosphere which helped create the $40 million made from the film whilst costing a mere $800,000 to produce. Even after the amazing success Hitchcock never received an award for psycho. In the opening sequence to the film Hitchcock already subtly tries to entice the audience to the film, it has his name at the very beginning as he was a big director at the time and usually nowadays you would see the big name actors at the beginning. ...read more.

As she thinks about what the people might be saying about her as she drives the camera very slowly zooms in on her face and her eyes to show the guilt she now feels for the theft. As she gets closer to the motel the camera is pulled back to show the audience that the crisis is over. In this the windscreen wiper links back to the introduction with the images of slashing. This music and windscreen wiper scene ends as a build up for no reason as Hitchcock again manipulates the audience into thinking that she will crash in the adverse weather conditions but then arrives safely at the Bates motel but obviously not safe for long. Marion then see's a sign for a motel and takes the sensible option to stop overnight and carry on the journey in the morning. The audience knows that this is an unfavourable place to be by the way the sign suddenly looms out of the dark and mist. The Bates Mansion is also a daunting image. Norman Bates however dispels these feelings by being a likeable and shy young man. During his conversation with Marion, Norman helps her regain her freedom of choice in her life, and helps her decide to do the right thing and return the money. ...read more.

reflects screaming which makes us think she is cut more also a cleaver camera technique is used as the camera shows the stabbing from above to show that the knife has power which is shown between characters usually, the music is very energetical and after the killer leaves its a lot less energetic. The camera focuses on Marion's hand which is originally centre of the screen then it slides down and this is to represent the loss of life. We then see Marion's eye with the water from the shower looking like a tear which gives the audience a more sympathetical view on the character. This was a very unusual occurrence for the time as Marion was leading lady as she was a prolific actress and is killed of within the first 45 minutes of the film. For the Shower scene when Marion is murdered it has 30-35 cuts when she is only stabbed eight times, this is to make it feel like she is stabbed a lot more and gives us faster pace to the scene. At the end of the panning shot, Hitchcock shows the house in which Norman lives. While the picture of the house is there, the audience hear Norman saying, 'blood' and 'mother' to make the viewers convinced that Normans mother has killed Marion. ...read more.