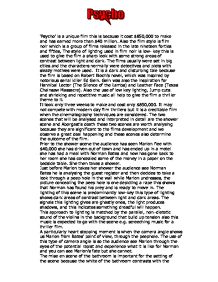 'Psycho' is a unique film

'Psycho' is a unique film this is because it cost $850,000 to make and has earned more than $40 million. Also the film style is film noir which is a group of films released in the late nineteen forties and fifties, The style of lighting used in film noir is low- key this is used to give the film a sharp look with some strong areas of contrast between light and dark. The films usually were set in big cities and the characters normally were detectives and plots with sleazy motives were used. It is a dark and disturbing tale because the film is based on Robert Bloch's novel, which was inspired by notorious serial killer Ed Gein. Gein was also the inspiration for Hannibal Lector (The Silence of the Lambs) and Leather Face (Texas Chainsaw Massacre). Also the use of low key lighting, Jump cuts and shrieking and repetitive music all help to give the film a thriller theme to it. It took only three weeks to make and cost only $850,000. It may not compete with modern day film thrillers but it is a creditable film when the cinematography techniques are considered. ...read more.

The audience first heard these violins when Marion was driving along the high way and there were no cars and it got dark. Marion realises she is in danger when the shower curtain opens up and the silhouette appears to Marion. The main camera angles used are tracking and tilts. One angle used is a tilt, this angle was used in the shower when Marion was being stabbed it was used to run up and down Marion's body to show her being stabbed this camera angle is on a fixed axis. Another angle used was a tracking shot this was used to follow the action. High angle point of views were used to show a view of Marion from the showerhead and it was used to show Marion from above and give us a wider picture. The stabbing event is actually 78 edits. The jump cut is fast editing where the shot is cut so it can go from one shot to the next very quickly, this use of editing is successful because it creates suspense and anxiety and makes our hearts race. Never once do we see the knife enter the body but it is still successful since it makes the audience cringe as the sound is so realistic, the ...read more.

Sound creates a sense of anticipation and excitement for the audience. The diegetic sound of his footsteps is quite eerie because the sound is repetitive and tension is created as he gets nearer and nearer the top. Also, the familiar sound of the repetitive violins indicates some thing shocking is going to happen as it has every other time the violins have been played. In contrast to this we see very little of the killer. All we see is the killers back because Hitchcock wants to conceal the identity of the killer, this adds tension so the audience are eager to now who the killer is then when we find out it is the Mother it comes as a shock and a twist in the story. In conclusion, when analysing I have tried to show how Hitchcock has cleverly used a wide variety of camera effects, clever lighting and use of sound. By using jump cuts a lot of tension was created and for the lighting Hitchcock has used low key to create large shadows to add to the eerie theme of the play. And finally for the sound Hitchcock uses a lot of non -diegetic sound e.g. the violins, which always indicate danger and puts us on the edge of our seats through out the play. ...read more.