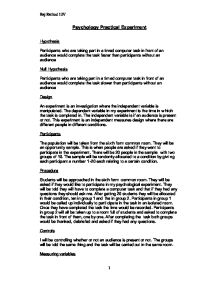 In his study people were asked to pronounce words between one and sixteen times, some of the words were more "dominant" than others, and these were said to be pronounced more frequently. The speed at which the words were shown was increased some going at even a hundredth of a second, so they had to guess the word. The results found that if a audience was present participants were more likely to guess "dominant" words Allport asked participants to write down as many associations as they could think of for words printed on the top of an otherwise blank piece of paper, (e.g. "building", ""laboratory") They were allowed to work for three one minute periods and performed alone and in front of two other persons. Results were quite clear : 93% of the participants produced more associations when working in the presence of others than working alone. Zajonc also trained cockroaches to run towards a light in a clear lucite t-maze. An "audience box" was located beneath the t-maze where the 'roach marathoners could see, and presumably smell, their colleagues. 'Roaches ran their t-mazes faster and more accurately with an audience of their fellow 'roaches than when no audience was present. Results Audience Present Group 1 No Audience Present Group 2 1 120 107 2 100 117 3 95 105 4 105 144 5 89 121 6 123 125 7 105 101 ...read more.

There were no ethical issues brought up as all participants were debriefed after they had carried out the experiment, although the participants may have felt a bit embarrassed if they had scored a low score in front of the audience. I could also not control the mood of the audience, for example when some people were doing well in the task they were cheering but when people were doing not so well they were not so vocal. My results have found that the effect of social facilitation can increase the performance of people when carrying out tasks as mentioned in Zajonc's and Allport's work, but it cannot always be applied to everyday tasks as a persons individual skill at that task to just pure luck can also take effect of the outcome. I could modify my experiment so that I could have the same people carrying out the 2 conditions, I could have also chosen a different task which was not demanding on computer skills. I can also vary the size of the sample I used as it would give me more data to analyse and give more confounding results. I could also use a wider age of people to see if the effect of social facilitation has greater or lower effect on older people's ability to carry out tasks. ...read more.